From time to time we like to plumb the depths of memory for stories about neighborhood businesses. This one is reaching a ways back, but we’re looking for a little help with any personal memories about this store, which operated out of the bustling commercial corner of NE 30th and Killingsworth.

The Davis Dairy Store, located at 5513 NE 30th, was operated by three generations of women from the Davis family, who also built and lived in the home at 2427 NE Dunckley here in the Alameda Park addition. A recent visitor to the blog—Teresa Roth—sent us some shards of memory from her mother Lucille, and some photographs to ponder. Here is Lucille’s mother Irene Davis, the matriarch of the store, standing near the open door in 1938, and the same spot today: 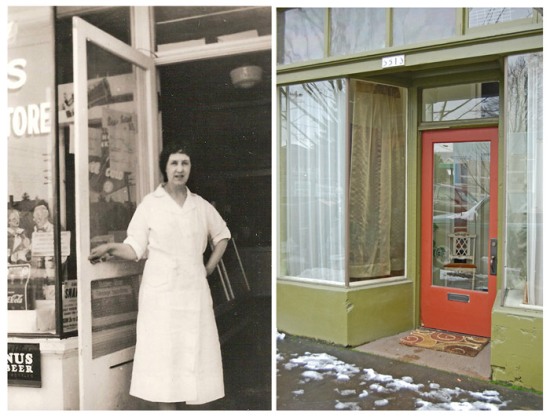 Irene’s daughter Lucille (far left) and cousin Isabel Buckendorf sitting out front in 1938. Note the words “bicycle shop” on the window behind them to the left, and the reflection of the power pole, which hasn’t moved much in 70 years. Historic photo courtesy of the Davis Family and Teresa Roth.

Irene and her husband Ernest built the Dunckley home and likely the business as well, though he was a machinist and she a stenographic secretary. The couple divorced in the mid 1920s. For as long as the couple’s daughter Lucille can remember, the store was just part of the family. Lucille, now in her mid 80s, and her daughter Teresa stroll through the neighborhood from time to time when they are in town together, remembering friends, cousins and happy moments.

After the divorce in the mid 1920s, Irene ran the store, with Lucille’s help during the summer, and likely with the help of her sister Mae, a piano teacher. Irene and Mae’s mother Martha LeFabre lived with them as well in the Dunckley Street house: three generations running the house and the business.

No one around today remembers exactly when the store opened or closed, but we do know it would have been popular with kids. Here’s an advertisement from 1938.

Flyer from Davis Dairy Store, 1938. Courtesy of the Davis Family and Teresa Roth.

The corner of NE 30th and Killingsworth has experienced a recent renaissance that echoes the vitality of the intersection in the 1920s and 1930s. Today, the area is officially known as the Concordia Neighborhood, though in those days it was known to both residents and customers as Irvington Park and many refer to it by its plat name: Foxchase. Just for context, here’s a shot of the overall commercial building today, which features some very tasty restaurants, including DOC, which we recommend. 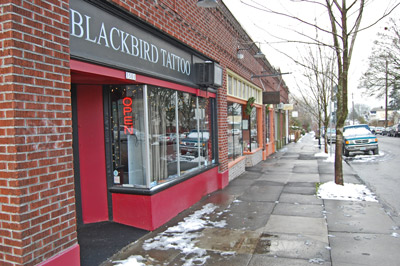 Any memories to share about the Davis Dairy Store or this bright and busy neighborhood corner?

According to the 1938 Polk City Directory, joining the Davis Dairy Store at 30th and Killingsworth were the following businesses: