While the pace and scale of change can often take your breath away (for good and not so good), it’s surprising how some aspects of our neighborhood landscape are recognizable from a distance of more than 100 years.

We’re preparing a program for Wednesday night, April 18th about Vernon neighborhood history—come on along if you like, 7:00 p.m. at the Leaven Community Center, 5431 NE 20th Avenue—so we’ve been out recently scouting around. Vernon is the neighborhood loosely bounded on the north and south between NE Ainsworth and NE Wygant, and the west and east from NE 11th to NE 21st. Walkabouts for us usually begin with finding a handful of old photos, reference points or things to look for and then sleuthing around the neighborhood looking for the right vantage point. Here’s a couple examples.

We love this old newspaper advertisement placed in the Oregon Journal on October 25, 1908 by developers of the Vernon addition. Imagine: $1,000. The house was built in 1907 for O.G. Goldberg.

And here’s another great pair, just a few blocks north, this time looking at the heart of the Vernon business district, from the Oregon Journal on October 30, 1920. Check out the streetcar tracks and overhead lines. 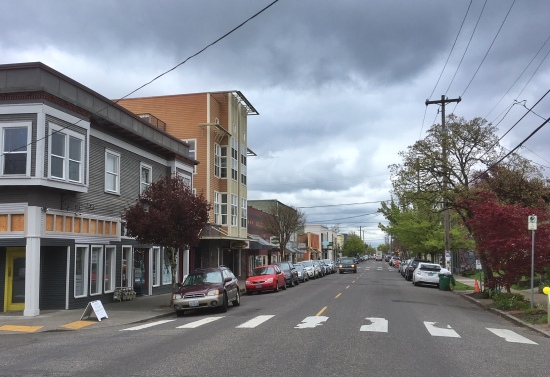 Looking east on Alberta at NE 16th Avenue, April 2018. The distinctive building on the northeast corner (left) was built in 1909 during the rise of the Vernon-Alberta business district.

Some of our favorite stories are from Vernon: the ghost of Old Vernon and its practice houses, the Alberta Streetcar, the mystery of Crane Street, Alberta storefronts, Alberta Park, opposition to (and even arson at) the new local fire station. So many stories to tell, including an upcoming post that shares the intriguing real estate drama about how Vernon almost didn’t become Vernon. Stay tuned.