We’ve been fortunate recently to spend some time with Jeanne Allen, a 98-year-old neighbor whose sharp and clear memory reaches well back into her childhood days here in the neighborhood. Jeanne has shared her memories about everything from the old St. Charles Church at NE 33rd and Webster Street, to exploring the brushy trails in the vacant lot at 24th and Fremont where Alameda Dental is now, to earning her girl scout campfire badge in the wilds of the 33rd Street Woods (today’s Wilshire Park, which is way more tame now than the wilderness it used to be).

One of our favorite images from her memory is the nighttime landscape from the darkened second floor room of a house where she grew up on NE 24th Avenue. At night, Jeanne recalls the Broadway Streetcar making its way north, the electrical pick-up mechanism skating along the overhead wires powering the streetcar’s forward motion. As it passed her house, electrical sparks off the wires just outside the window made a dance of shadow and light inside her bedroom, searing into her memory, vivid a lifetime later.

As we talked about change during a recent drive through the neighborhood, Jeanne told us about just how different things were around here in the early years. Pointing out a small home toward the back of one lot, she said something that caught our attention:

“I sure hate to see the orchard houses going away.”

When Jeanne and her husband Bob built their home in Concordia back in 1950, they were surrounded by orchards of cherries, apricots, pears and apples, planted in the early 1900s. 42nd Avenue—like its parallel twin to the west 33rd Avenue—was simply known as the “County Road” and doubled as Portland city limits. Most of the streets in the surrounding area between Prescott, Killingsworth, 42nd and 33rd weren’t paved. Some hadn’t even been constructed.

Jeanne remembers simple small buildings (she didn’t call them shacks, but that’s a term that comes to mind) scattered out among the orchards that served as temporary quarters for those tending the orchards during the year and harvesting during the fall. She and her family always called these little places “orchard houses,” which was a commonly known term and function during those years.

Orchard houses took a simple form: shed-roofed front and back porch; entry door in the middle and a backdoor lined up out the back; a bedroom and window on one side, an open living space on the other, maybe a counter for food preparation; often oriented in an unusual way on the lot, either toward the back or sitting at an angle.

Here’s one that Jeanne knows for certain was an orchard house (she remembers the actual nearby orchard). Plumbing was added to the house in 1924; it was described then as an old one-story frame residence.

An orchard house, seen on a walk through the neighborhood. The rear addition was added in later years. This home has been thoughtfully updated and maintained.

Jeanne’s description got us thinking about houses we’ve seen in the neighborhood, and about evidence of orchard houses appearing in old aerial photos we’ve been looking at, and in 1928 Sanborn maps of the area. Here, take a look at these two Sanborn plates (click for a larger view). 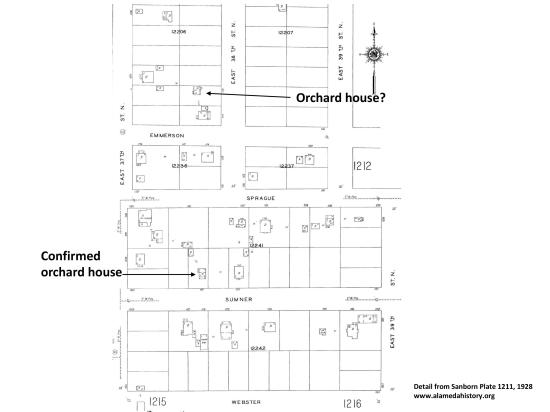 Do you know of any orchard houses? There are likely just a small handful left and we’d like to document them and explore their stories. If you have one in mind (or think you know a candidate), send us a photo or address and we’ll see what we can learn.