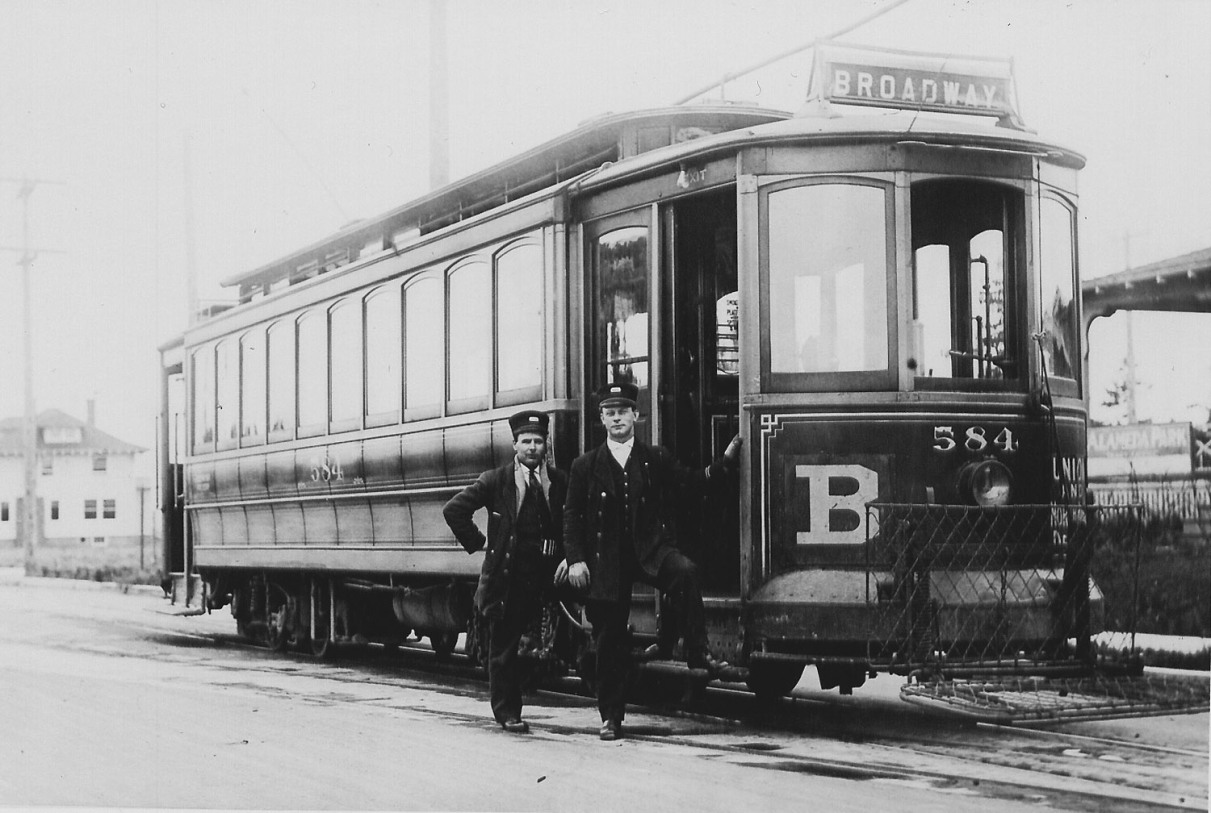 The Broadway Streetcar at the end of the line, looking north near NE 29th and Mason, about 1910.The house in the background to the left is still there today. A banner on the porch to the right announces the availability of homes in the newly platted Alameda Park. Photo Courtesy of the Bill Hayes Collection.

Today, us Alamedans take for granted our ability to travel out of the neighborhood any time of the day or night. When we need to be on the move, most of us travel by car or bike down our familiar thoroughfares: Fremont, 33rd, 24th, 21st. There was a time, however, within the reach of one good memory, when the notion “neighborhood thoroughfare” meant something completely different than the busy streets we know today.

Two generations of our neighbors grew up here in Alameda relying on the Broadway streetcar to take them where they needed to go. Ever-present, often noisy, sometimes too cold (or too hot), but always dependable, the Broadway car served Alameda loyally from 1910 to 1948. And though its been gone from our streets and our lives now for 54 years, physical clues remain when you learn how to see them, and neighbors are still pleased to recall their memories about one of Portland’s premier streetcar routes.

During its lifespan, the Broadway car witnessed major changes to the life of our city. When our streetcar first traveled Regents Hill—which the motormen had dubbed “Mud Hill” due to the pre-construction mudbowl of the early Alameda Ridge—the automobile was still a novelty. Construction had just begun on the Broadway Bridge. The Alameda Land Company was hatching its plans to sell the lots we all live on today. Portland’s population stood at 207,000.

Sensitive to the transport needs of its prospective customers, the Alameda Land Company financed construction of the rails and overhead electric lines that brought the car up Regents Hill to 29th and Mason. Developers all over the city knew access was one key to selling lots, particularly in the muddy and wild environs that Alameda represented in 1909. The builder of my own home, William B. Donahue, figured out this selling point and picked four lots in the neighborhood within a one-block walk of the streetcar upon which to build.

A narrative map of the streetcar’s complete 8.8 mile circuit would go something like this, beginning here near us at the outbound end. Once arriving at the end of the line at 29th and Mason, the motorman would step outside, drop the trolley pole on one end of the car and secure it to the roof. He would raise the pole on the other end for the trip downtown and hook it to the overhead line. And off he would go to the south, passing straight through today’s “Bus and Bicycle Only” notch at Regents and Alameda, then down the hill to 24th, where the rails bent south. At 24th and Fremont, the line jogged west for two blocks before turning south on 22nd. The car continued south on 22nd toward Broadway, with a minor “s” turn at Tillamook before the corner onto Broadway, where the car turned west toward downtown and across the Broadway Bridge. The downtown end of the line was Broadway and Jefferson, where the process began again as the motorman readied for the outbound trip. A key difference on the outbound leg was that the car turned north on 24th not 22nd. The 2.2 mile long loop formed by the 22nd and 24th couplet—the Fremont Loop—makes for a nice walking circuit even today.

In 1923, a trip downtown cost an adult 8 cents. Kids could buy a special packet of school tickets allowing 25 rides for $1. In 1932, a monthly pass for unlimited rides cost $1.25. Alamedans used the streetcar as a vital link to shopping, churchgoing, commuting to the office, trips to the doctor. Some even rode the line for entertainment.

During the day, cars ran every 10 minutes, and Alamedans referred to them as “regular cars” or “trains.” During the morning and evening rush hours, additional cars called “trippers” were put into the circuit to handle additional riders. Trippers did not climb the hill to 29th and Mason, traveling only on the Fremont Loop to save time. At night, our line was one of the handful in Portland that featured an “owl car,” a single train that made the circuit once an hour between midnight and 5 a.m. Owl service was a special distinction.

The late Portland streetcar historian Bill Hayes remembered one rookie motorman who wasn’t adequately informed about the distinction between trippers and owl service on the Broadway line.This particular young motorman was introduced to our route while driving a tripper under the tutelage of a veteran driver. The rookie knew the rails continued up the hill, but had never visited the end of the line during daylight. His first solo voyage came well after midnight at the helm of an owl car. He powered up the hill, through the notch and into the straightaway north on 29th. There were no buffers or formal end to the Broadway line, it just finished unceremoniously in the dark where the rails ended at Mason. The rookie motorman, however, did not know this. He powered his way off the end of the rail in the middle of that memorable night and left gouges in the surface of Northeast 29th Avenue that were visible until the recent past.

Before he died in 2006, Hayes ran Portland Radio Clinic, a radio sales and repair business at 30th and Broadway and knew Alameda well during the heyday of the streetcar. On May 15, 1932, a new type of car was introduced to the Broadway line, the Brill “Master Unit,” replacing the older, noiser and by then well-used cars. Hayes traveled up to 29th and Mason on the car’s first run and remembers how different it was from the earlier streetcars.

“Those new ones were fast, smooth, comfortable and spotless,” Hayes remembered during a 2003 interview. One of the 1932 Brills that traveled our neighborhood has been lovingly restored by the Oregon Electric Railway Historical Society. You can ride it today (Broadway Car 813 on the Willamette Shore Trolley) between Lake Oswego and Riverplace: a great outing with the kids and an opportunity to learn about Portland history. 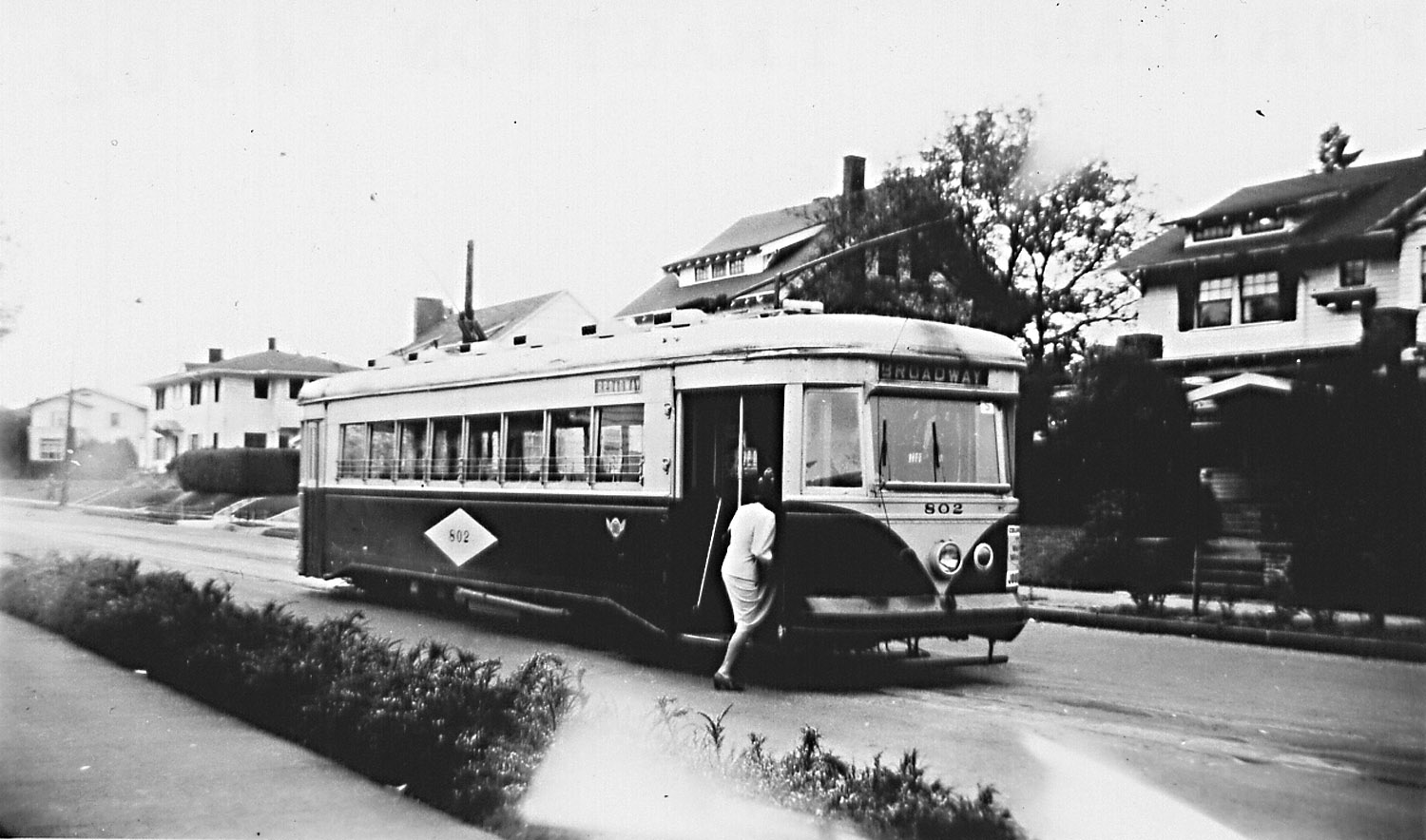 A Brill streetcar at the far north end of the Broadway Line, 1948. The photo is taken looking southwest from the corner of NE 29th and Mason. Go look at this spot today and you’ll see the houses and yards haven’t changed that much. Photo Courtesy of the Bill Hayes Collection. 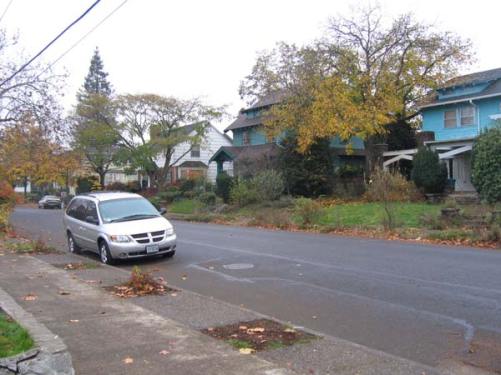 The Broadway streetcar was replaced by bus on August 1, 1948. By 1950, all of Portland’s once ubiquitous streetcar lines were gone. In the early days of neighborhood life, our streetcar was indispensable. It was one catalyst that made development of Alameda possible. It linked us to downtown and to other neighborhoods near and far. To hear the stories, it linked us to each other in a way too.

Want to look for clues to our lost streetcar line? Next time you are up at Northeast 29th and Mason, notice how 29th narrows on the north side of the intersection. The wider stretch of street to the south was necessary to accommodate the rails and the traffic. Or have a good look at Northeast 22nd and you’ll notice how much wider it is than any of our north-south streets. There are other clues to be found in the alignment of power poles, in the remnants of rail unearthed from time to time during street repair, and in the memories of those who remember the clanky, drafty, dependable Broadway streetcar.

Looking for more information on Portland’s streetcars? Check out the book Fares Please by John Labbe and Richard Thompson’s Portland Streetcars. Or visit these excellent websites:

Here’s an outstanding interactive map that allows you to zoom right in and see the location of all of Portland’s streetcar lines overlaid on a map of today. Kudos to Portland-based designer Cameron Booth for this great tool.\

OPB’s Oregon Experience produced a great 29-minute video about Portland’s streetcars (including some photos of the old Broadway Streetcar that traveled through the heart of northeast Portland neighborhoods.

The Oregon Encyclopedia has a great article on streetcars:

Back to Alameda Stories