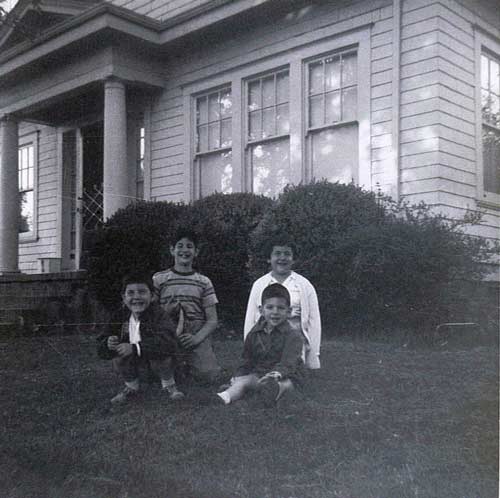 When Alameda resident Steve Goodman gazes out his dining room window, he can see things most neighbors can’t, like the favorite old cherry tree that stood just there. Or the old wooden porch pillars that used to hold up the portico. Or the streams of kids walking to school on a cold morning. It’s been a few years, but these things-now gone-were landmarks of his growing up years.

Goodman, 52, is one of a handful of Alameda residents who live in the houses where they grew up. Steve and his wife Teresa, and daughter Nicole, live in the 1914 Dutch Colonial filled with memories and stories from Steve’s past.

Before buying the house from his parents in 1981, Steve was living in the Concordia neighborhood. But in 1981-with Oregon in the midst of a recession-real estate was not perceived as the investment it is today. After he bought the house, it actually went down in value for six years in a row.

“All we hear today is how property values are continuing to rise,” Steve says. “It just seems a given that these houses are going to appreciate. But it wasn’t always like that. I didn’t buy the house as an investment necessarily so I wasn’t overly upset, but I was relieved when the market finally turned around and it’s been amazing since then.”

Weathering the changing economy is just one kind of perspective Steve has gained during his years in Alameda. He’s also seen the demographics of the neighborhood change.

“When the neighborhood was built in the teens and twenties, I think it was more like it is now…kind of a nice neighborhood. Then in the 1950s and 1960s, it was a working class neighborhood and these old houses in Alameda and Irvington weren’t in such high demand. When I was a kid, the dad of the family living in the big house here on this block was a delivery truck driver, and the mom stayed home and raised four kids.”

So, does Steve think of himself as a kid in the house, his mother standing at the door calling him in for dinner? Sometimes.

“There’s pretty much a story behind every nick in the trim, every bump in the wall, every nook and cranny” he says with a smile. Like the chandelier in the entry hall and the time he and his brother were playing ball in the house. Uh-oh.

“I can remember like it was slow motion, the ball hitting that old chandelier, and crash! My parents came running in here screaming; glass was all over the place.” Steve pauses for a part wistful, part I-can’t-believe-we-did-that sidelong glance around the floor that was covered with shards of glass. “When I look at that light fixture today, I just smile when I remember the day we bought it, and why we bought it.”

That’s one of the neat things about living in the house where you grew up: inhabiting one big inside joke, a springboard into smiling family moments, a time machine of sorts that connects you with loved ones now gone or far away, with pleasant memories of place.

One of Steve’s favorite places is nearby Wilshire Park, which has been a steady and important part of his life all the way along.

“That place was like my home,” he says proudly. “It has served me in all the phases of my life.” The Goodman kids played at the playground. As Steve grew older, he and his brothers played Little League baseball there. In high school, it was a place to hang out with friends. And today, he’s back with his own family once again to walk the dog, play soccer, have a picnic. He remembers the Columbus Day Storm of 1962 making a memorable impact on the park and its tall Douglas-fir trees.

“It looked like a war zone, a whole different landscape, and it’s never really looked the same since.” Jack-strawed trees were woven together on the ground making debris piles shoulder high. Picking up the mess was a major job.

Steve and his friends loved to cruise the neighborhood on their bicycles, and he remembers the ride up Deadman’s Hill (NE Stuart Drive) to Alameda Drive as a rite of passage. “We would try to ride up the hill without stopping. If you could do that, you knew you were a ‘big kid.’ I think I finally managed that in second grade. It was a very big deal with the boys in kindergarten: who could make it up the hill and who couldn’t.” Keeping with tradition, daughter Nicole pedaled up the hill when she was seven years old.

Another favorite haunt on the bike was the 30th Avenue Theater, located at NE 30th and Alberta (now called the Victory Outreach Church, and originally known as the Alameda Theater when it opened to the public in 1927). The boys would ride their bikes up for the matinee and then drop in next door for an ice cream at the Bluebird Ice Cream shop. Steve’s favorite was the licorice.

In the mid-1960s, the Goodman family remodeled their house, adding aluminum siding and aluminum windows. The wood front porch pillars were removed in favor of wrought iron. Some of the original wood mouldings were removed inside. The upstairs sleeping porch was pulled off. The French doors leading to the back porch were removed and covered over.

“I guess that was called modernizing,” he says shaking his head. “Now I have plans to un-modernize-pillars, windows, siding-but there always seems to be other priorities.”

In some ways, Steve didn’t just buy the house, he bought a family archive. Steve’s parents raised four children in the house, and he’s always coming across something in a drawer or cupboard from the first Goodman family.

“Sometimes you’ll open a drawer and way in back will be an old photo or something. I’ve started putting it all in a file.” Over the years Steve has found his father’s birth certificate, pictures of the home in Spokane where his dad grew up, and other family memorabilia.

Steve’s had mixed reactions these last 25 years when he tells people he lives in the house where he grew up. “Sometimes I don’t tell people because they think it’s odd. I’d say about a third of people think it’s neat; a third think it’s odd; and a third don’t really think about it.”

Steve’s clearly in the camp of thinking it’s neat, and feels fortunate to know his own four walls so well.