May 30, 2009 By Doug in Favorite Books, Neighborhood History 8 Comments

We’ve been re-reading some favorite books recently, and as it turns out, finding quite a few clues to the world of neighborhood history. Award winning children’s writer Beverly Cleary grew up in the neighborhood and if you read carefully, you’ll find real echoes of our past in her books.

Cleary imagined an entire universe in a few small blocks. Our favorite young residents—Ramona, Beezus, Henry, Ribsy—crisscrossed their kingdom on bikes and on foot walking to their beloved Glenwood School, delivering the evening Journal newspaper, and getting themselves into some memorable misadventures. 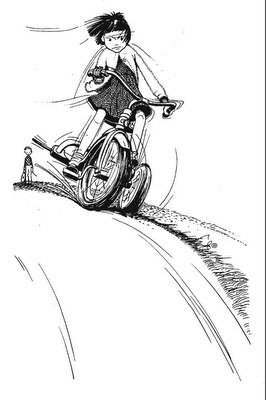 Ramona Rides downhill (is that Regents or maybe NE 37th?) in a drawing by Louis Darling.

The geography of that imagined place came from author Beverly Cleary’s own experience as a child growing up here in the 1920s and 1930s. She lived in a home on Northeast 37th Avenue, and attended the school now named for her: the Beverly Cleary School Fernwood Campus. The landmarks that define Henry and Ramona’s world—the churches, schools and houses, the hills and even the vacant lots—are drawn from places Cleary frequented as a young person.

It’s possible to find clues to Cleary’s own geography—and even a sense of Alameda neighborhood life in the 1950s—by exploring Henry and Ramona’s neighborhood as it unfolds on the pages of more than a dozen of her books.

A good place to begin looking for clues is Ramona Quimby’s house, just up the street from Henry Huggins on Klickitat Street. Cleary actually tells us in one of her books that Ramona lived with her mother, father and sister Beezus in a rented house near the corner of 28th and Klickitat. I remember reading that part of the story to my daughter one night and making a mental note that I needed to go look up that address on my next walk through the neighborhood.

As many astute readers will recognize, the corner of 28th and Klickitat is actually a “T” intersection adjacent to the playground at Alameda School. The day I walked past that spot and realized it was the setting for Ramona’s fictional house (a school playground), I laughed out loud and tipped my hat to Beverly Cleary.

All readers of the series know that Henry Huggins lives with his mother, his father and his dog Ribsy in a square white house on Klickitat Street. Cleary never really tells us exactly where on Klickitat that might be. But if it’s a square white house—let’s imagine an old Portland foursquare style house with a nice porch—chances are it’s west of Ramona’s house. In Henry And the Paper Route, Cleary hints that Henry’s square white house was slightly elevated above the sidewalk with a sloping lawn the kids rolled down. This sounds indeed like a four-square, built in the 19-teens. Now all we have to look for is Henry’s red bike and the barking Ribsy.

Ramona and Henry’s Glenwood School is an obvious stand in for Fernwood School, where the young Cleary attended before moving on to Grant High School. Why didn’t she create a fictionalized role for Alameda School? We do know there was a certain rivalry between neighborhood schools.  Kids from one school sometimes looked down their noses at kids from the other. Was omitting Alameda School a diss? Probably not. Just a little too complicated to explain why kids living in the playground of one school (wink) would be going to a different school a few blocks away.

Vacant lots…now there is a commodity of the 1950s that we just don’t have any more. By the late 1950s virtually every easily buildable lot in Alameda had been developed (many of the last ones by builder Ken Birkemeier). During Cleary’s growing up years—the 1920s and 1930s—there were plenty vacant lots to be found and they surely provided a refuge for everything from baseball to clubhouses. In Cleary’s 1955 Henry And the Paper Route, Henry watches as the ladies club sets up sawhorses and planks in a nearby vacant lot for the annual fundraising rummage sale. The vacant lot was a community commodity as well as landmark. Reading more closely between the lines, was the ladies club the fictional counterpart of our own Alameda Tuesday Club? Could be.

The business district of the fictional neighborhood bears some resemblance to places we all shop and frequent today. The movie theater, dime store, Rose City Barber Shop and even the “Colossal Market” are landmarks in today’s Hollywood neighborhood. The Colossal—where Henry’s mother bought everything from vegetables to hair clippers—was probably patterned after the original Fred Meyer store at 42nd and Sandy.

Al’s Thrifty Service Station, where Ribsy steals a policeman’s lunch, is today’s 76 station at 33rd and Broadway. Kids at Glenwood School watch from their classroom windows as a new supermarket is built: today’s QFC (formerly Kienows) just south of Fernwood. All the pieces line up.

In addition to the fun of hearing about these thinly disguised places we all know from our area’s past, there’s some wonderful imagery in these books that evokes an earlier time in the neighborhood, while also being timeless:

And a timeless image that could have been borrowed from this winter: Ramona  sledding down the 37th Street hill on her dad’s old sled. Now there’s a scene drawn from the author’s personal experience, just a few doors up from her own childhood home.

Which gets to what makes Beverly Cleary’s work so appealing and enduring (and even instructive, for us students of history who also like to read to our kids): she crafts a slice of universal life through the experiences of her likeable, believable characters, and all through the lens of a remembered Northeast Portland childhood.