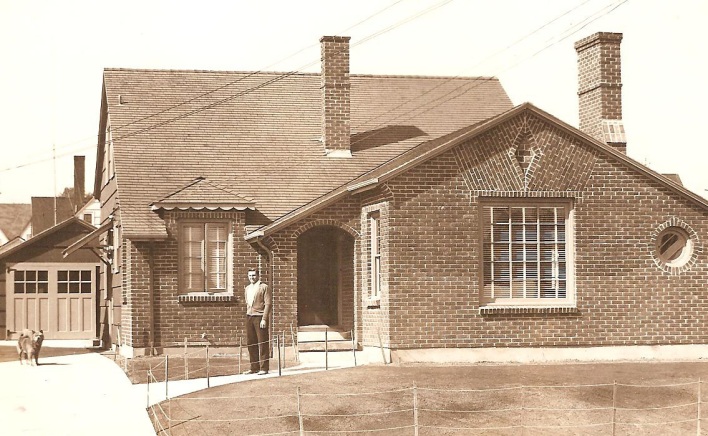 Designer and builder Kenny Birkemeier in front of a recently completed home at 3011 NE 30th, in  May 1936. Note the decorative brick pattern, and the oculus window: design details he used in other homes. An exact reverse of this design is at 3209 NE Knott. From where he is standing in this photo, Birkemeier could look out and see almost a dozen other homes he built in this immediate area, just south of Fremont in Northeast Portland. Photo courtesy of Dan Birkemeier.

The last major builder to leave his mark on the Alameda neighborhood, Kenneth “Kenny” Birkemeier, produced at least 20 homes in the Alameda Park addition alone, and dozens of other homes across the city, including apartments  and duplexes throughout the city. Birkemeier’s building career in the Alameda area spanned from 1932-1952 and included several building styles, ranging from his earlier English cottage style to the more modern 1950s contemporary ranch house.

A detail from Birkmeier’s drawings for a mid-1960s ranch house in Tigard. The interior stone work, high peaked ceilings and glass are signature elements of Birkemeier’s later work. Courtesy of Dan Birkemeier.

Less recognizable perhaps as Birkemeier-designed homes, but clearly bearing family resemblance in floor plan and building materials, are his earlier homes, which have a steep-roofed English cottage look to them (below).

Birkemeier was born October 21, 1905 into a family with a tradition in the building arts. His grandfather Fred designed and built the 1878 Birkemeier-Sweetland house, located near Kellogg Lake, in Milwaukie, Ore. Ken’s father — also named Fred — was a casket maker and fine carpenter.

Birkemeier attended the University of Oregon in the early 1920s, studying architecture. Before becoming a builder, he worked in a butcher’s shop in Milwaukie and then as a draftsman for furniture maker Bruno P. Johns (for whom Portland’s Johns Landing is named). Family members recall that whatever he was doing, Ken was always doodling on paper.

As a builder — known as “Kenny” to his contemporaries and the broader construction community — Birkemeier made a reputation as a person who did it all. He drew his own plans, built his own forms, poured his own foundations, did his own framing, and even built his own custom kitchen cabinets, often crafted in place with 4×8 sheets of birch-faced plywood. He had a small crew, which included his brother Ed Birkemeier, Fred Snelling who did the brick and stone work (both exterior, and on decorative fireplaces in many of the homes), Bill Gammon, Howard McDonald, and in later years his son Brent Birkemeier, who worked alongside his father on many projects.

Typically, Birkemeier built his homes on speculation, though there were several larger contract-built homes for buyers who wanted to make sure they had a Birkemeier home designed specifically for them.

He built a remarkable number of houses in the area just south of Fremont on the hilly streets running south — from 32nd place to 29th — a platted subdivision technically called the “Town of Wayne” but generally considered part of the Alameda neighborhood. Take a stroll through this neighborhood, and keep an eye out for the ever-present oculus or round window (left), and the rough brick pattern (right): telltale Birkmeier signatures. You’ll find many of his houses here, most built in the mid 1930s. 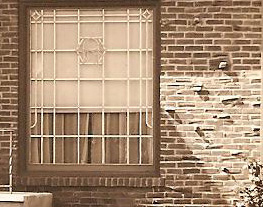 After Alameda was built-out in the mid 1950s, Birkemeier continued to design and build homes near Reed College,  in other expanding eastside neighborhoods, and on Portland’s west side. He built several apartment buildings and duplexes in northwest and southwest Portland, as well as high-end homes on hillside lots.

Family members recall that Birkemeier continued to do the construction himself well into his 80s. At age 84, his family asked him to refrain from being up on the roof of his construction projects, and finally at age 86 he agreed. He died at age 90 on February 11, 1996.

This home, located at 3273 NE Fremont, seems to have a little of Birkemeier’s old and new style. Note the oculus window above, the decorative brick face, and the wide clapboard siding toward the rear of the house. The photo was taken about the time the house was built in March 1938. Photo courtesy of Dan Birkemeier.

Birkemeier and his first wife Marge were married for more than 50 years and had two sons, Brent and Bruce. Following Marge’s death, he married Ramona.

Ken’s grandson Dan Birkemeier, who grew up in a house built by his grandfather, continues the family tradition with buildings: he is an architect living in Seattle.

His grandfather’s legacy, as Dan Birkmeier experienced, is much wider than just the homes he has left behind.

“It was my grandfather’s idea that I go to college for architecture,” writes Dan. “He suggested I go to the Oregon School of Design, a small school in the Pearl District of NW Portland and in fact he funded most of my schooling. It wasn’t until my later years of school that I discovered the legacy that Ken had in town. I was at the grocery store writing a check and the casher saw my name on the check and asked if I was related to the builder of the same name. I said I was and she told me ‘I remember when a Birkemeier house was the house to have in town.’ That was the first time I’d ever heard such a thing.”

“Unfortunately I never discussed design philosophy with Ken. I would have liked to but I was young and busy with my own life. Quickly after graduating in 1991 I moved to Charlotte North Carolina to work. I saw my grandfather on visits back to town but he died before I moved back. I was able to show him things I was working on but never discussed them in too much detail. One piece of advice he gave me on several occasions was that it was best to design and build my own projects. He said that’s where the money is. That’s how he worked.”

Homes built by Birkemeier in the Alameda Park addition:

This is just a partial list, representing the homes Birkemeier is known to have built in the Alameda Park addition proper. There are many more: no conclusive listing has been found or yet developed. If you would like to share a picture of your Birkemeier home, or a story about what you like about living in one, please send me a note and I will post it here. I will be adding to this material as additional information and photos become available.

Special thanks to the Birkemeier family for their assistance in gathering photos and information for this summary.