Today I’ve added a new section to the Alameda History website that provides a focus on the builders. Look up above and to the right and you’ll see the word “The Builders.” From there you can click into a sub-page that provides links off into biographies I’m writing about the men and women who shaped our neighborhood landscape. I’ve started out with three builders I am very familiar with, but soon there will be more.

Fans of houses built by Ken Birkemeier will be glad to know I’ve made contact with his family and will have lots to share soon, including early photos of some houses and a complete listing of Birkemeier houses in the neighborhood.

My goal in focusing on the builders is to pay tribute to them, to take account of and remember their work, and to create an interest, appreciation and curiosity about the homes we all live in.

As the Alameda Neighborhood approaches its 100th anniversary, I thought it might be of interest to turn the clock back for a sense of what people were thinking about this part of the city in those days. I’ve done a comprehensive review of The Oregonian from 1909 to 1929 and have hundreds of articles and advertisements that shed light on the life of Alameda, Beaumont, Rose City Park and other Northeast Portland neighborhoods. Here’s one, an advertisement from 99 years ago: Sunday, October 24, 1909: 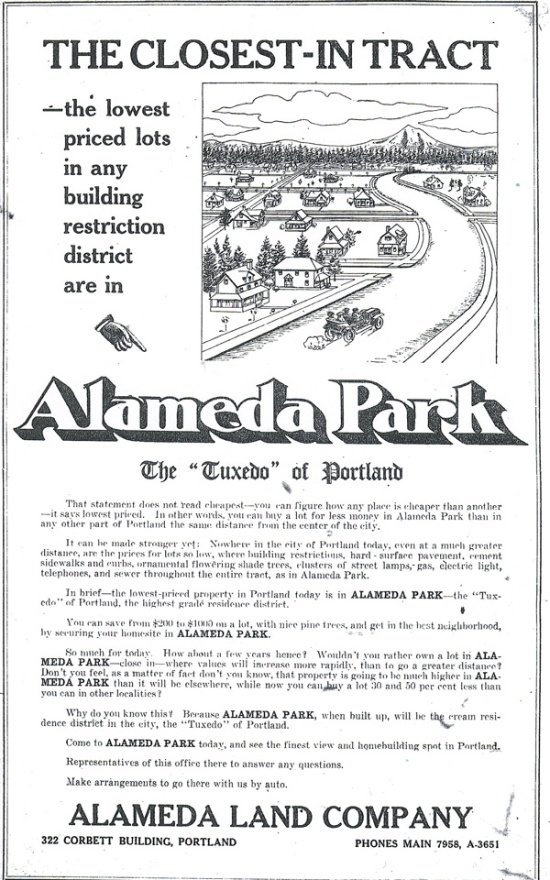 10-24-09 Advertisement for Alameda Park Neighborhood, from The Oregonian

Plenty of food for thought here. The cartoon-like drawing showing a few houses (note the front porches) scattered on open blocks; the serpentine Alameda leading off toward Mt. Hood; street trees planted in orderly fashion. And the car. The text extols the affordable nature of the lots here in Alameda Park, the amenities, including flowering shade trees, telephone, electricity and sewer. The “Tuxedo” of Portland. Hmm.

Ninety-nine years ago this month, the streets were in, but not yet hard-surfaced (that was still almost three years off, completed in the spring of 1912). Curbs and sidewalks had not yet been framed and poured, nor was there any gas or electric installed. The only sounds of home construction were coming from Concordia and Vernon–neighborhoods to the north–where building was fast and furious. But here in Alameda, despite what the ad might have you think, it was a quiet place at the far northeast edge of the city limits. The first boom of Alameda construction was still a year or more away.

As we enter the 100th anniversary phase, in 2009-2011, I’ll be sharing clippings on a “real-time” basis. You can read all the Alameda news that was fit to print on the day it ran, exactly 100 years ago. What better way to learn about our history…no such thing as old news.