We’ve been out in the neighborhood on foot and bicycle recently and have seen the tremendous drop of chestnuts building up on sidewalks and streets. Thousands of smooth, rich, ebony gems inside prickly green coats falling from branches and being crushed underfoot.

Chestnuts gathering at the curb.

Seeing all these beauties puts us in mind of a question asked recently by a reader about a handed-down memory of chestnut trees along Alberta Court from NE 33rd to NE 42nd, in an area some remember as property owned by Joe Bennard and his brothers.

We really like questions like this, which require us to do some genealogy, some geography and some general asking around.

Joe Bernard was actually Joe Bennard (who was born in 1901 as Joe Bennardo). Joe ran a real estate company based in an office (now gone) that he built facing Alberta Court directly behind today’s Doggie Business at 4905 NE 42nd Avenue.

Joe built the Doggie Business building in 1937, originally a tavern and restaurant. Joe and and his brothers (the brothers kept the original family name Bennardo) lived in the neighborhood, and one brother built the house three doors north on the west side of NE 42nd. But we weren’t able to verify if the Bennardos actually owned a farm, or what extent it may have covered.

The American chestnut (castanea dentate) was a common tree in all American cities, but suffered a major disease outbreak that drastically reduced its numbers by the mid-1930s. It seems unlikely that enough of these great old trees would have been left mid-century to have lined Alberta Court. And of course it was called Alberta Street then, and traveled along through open fields and forest stands.

And here’s an interesting note: Alberta Street was renamed to Alberta Court after a vote of residents on the street in the summer of 1940 and a city ordinance passed on August 28, 1940. On August 11, 1940, The Oregonian reported that “Multnomah County suggested the city change the name of the street within the city limits to avoid confusion and a survey of sentiment of the property owners was taken. Most of them approve the change to avoid confusion.”

We pulled up a series of aerial photos from the 1920s and 1930s that show the western stretch of the street, and we don’t see a line of trees in this area. We did connect with former neighborhood paperboy and AH reader John Hamnett, who delivered newspapers along Alberta Court in the late 1940s and while he remembered homeless camps there along what was the city limits, he didn’t recall seeing any orchard or line of chestnuts.

This doesn’t mean there weren’t chestnuts along Alberta Court, just that evidence is scarce. In fact, it does appear there is a lone survivor of what was remembered: you can find a beautiful old chestnut tree today at the northeast corner of NE 41st and Alberta Court, reminding us they were indeed in the neighborhood. We’ll keep digging on this, and welcome any information from AH readers. 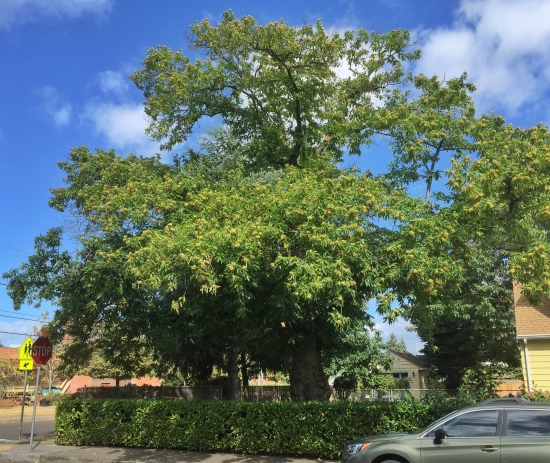 Get out there and enjoy this beautiful fall weather!