Our neighbors Rob and Marti are carefully and heroically remodeling their 1923 bungalow kitchen. They’re doing a great job. We’ve been following their progress and in a recent driveway conversation, Rob held up an old house part (the square frame in the photo below) and asked a kitchen archaeology question we thought other old house readers might be interested in reading about too. Recognize this?

It’s the face of a vent removed from an outside kitchen wall, one of two that were part of an early and natural cooling method known as a “California Cooler.” In a time before refrigeration—and borne out of the bungalow ethic of keeping things simple and natural—these indoor cabinets were the next best thing and were built into many eastside kitchens and homes.

Here’s another look, showing the frame in the original clapboard siding, which was shingled over in the 1950s (thanks to Rob Donnelly for the photos): 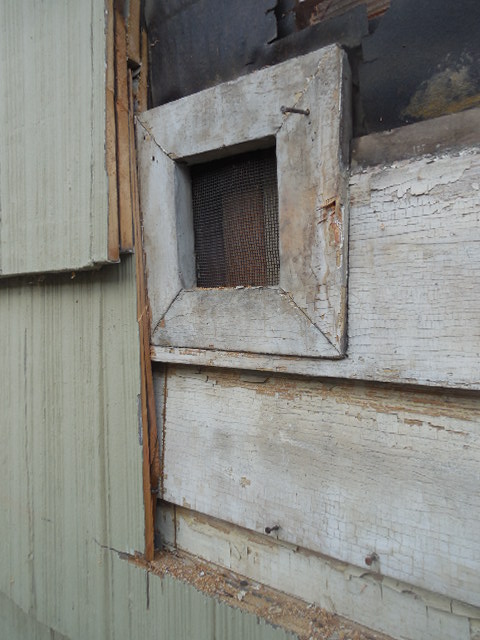 Here’s how they worked: the vents were stacked vertically one at the bottom of the cabinet and one near the top, and always placed on an outside wall. Maybe you have seen the exterior evidence: two small frames with screen or mesh on an outside kitchen wall. Here’s what they looked like from the inside. The old cupboard has been removed showing just the vents.

Inside the kitchen, the vents led into a cabinet with shelves, which were often just slats with space between to promote ventilation. The cabinet or cupboard had a door on the front, just like any other cupboard in the kitchen.

But the physics of convection made this cupboard different: warm air would escape through the top vent, which acted like a chimney, and cooler air was drawn in through the bottom vent. The result was a measurably cooler space that kept foods fresher longer, and promoted cooling for just-baked items.

The extremes of summer and of winter obviously weren’t optimal (“honey, why is it so cold in the kitchen?”). But they did work, and were omnipresent in the older homes we love. Today, some kitchen designers and builders interested in sustainability and energy efficiency are even recreating this old technology for the same reasons they were first installed a century ago.

Now that you know what to look for, keep your eyes peeled when you are out and about in the neighborhood for twin openings on an exterior kitchen wall, and chances are you are seeing evidence of a California cooler. Do you have one? Send us a photo.