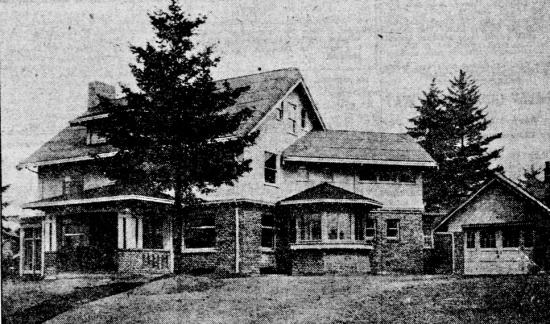 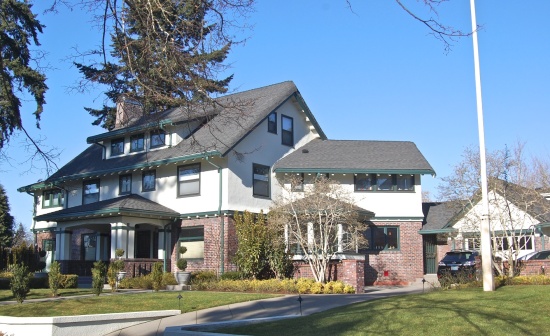 Here’s a photo of a house you’ll recognize at 3119 NE Alameda Street, built by Captain Delmer Shaver and his wife Nellie. Shaver spent his life (1867-1950) working with his father and brothers to create and operate the Shaver Transportation Company, which started out as a steamship company on the Columbia and Willamette rivers and has become a leading tugboat and barge company still on the waters today. Delmer and Nellie had three children (James, Ellen and Doris) who grew up in this house, and attended Alameda School and Grant High School.

The then photo is from the August 9, 1914 edition of The Oregonian. The caption described that construction (which cost $10,000 which was a fair amount in 1914) began in February, was nearly complete in August, but the house would not be occupied until late fall. The second floor included a sleeping porch (which can be seen on the far right), and service quarters on the third floor. The unusually large lot was described as being a “park,” and the garage being large and “commodious.”

Not necessarily related to the house, but of note in the Shavers’ life in August 1914 was a gathering to mark their 25th wedding anniversary, held at the couple’s other home near Cannon Beach, which was poetically described in a brief article that appeared in the August 24th edition of The Oregonian.

Captain and Mrs. Shaver celebrated their twenty-fifth wedding anniversary early this week at their country place. An elaborate dinner was served at tables arranged on the lawn. In the evening Japanese lanterns lighted the grounds and added dashes of color most effective among the deep green of the trees. The tables were decorated attractively. A bonfire followed the supper. Congratulations and good wishes were extended to the host and hostess.

Once they moved in, the Shavers hosted similar gatherings at the Alameda home, some of which also made it onto the pages of The Oregonian, including soiree-like block parties that shut down The Alameda (as the street was known then) with lanterns hung across the road, music and other entertainments, and neighbors coming from throughout Portland to enjoy summer evenings.

We think Captain Shaver would definitely recognize the house today, and would be pleased with its upkeep and the recent landscaping work that has been completed.