The former Marble Palace Grocery and Market building (later known as Prescott Foods), 3587 NE Prescott, has recently been restored and is now alive and well as an art studio.

While looking into the history of the Wilshire Market building, we’ve become interested in the grocery and market world of years gone past.

In a day when large supermarkets did not exist, mom-and-pop stores were everywhere on the eastside. So were butcher shops, bakeries, and candy stores. A quick look at Portland’s business directory for 1931 lists more than 750 individual grocery stores, most of them owned and operated by families.

Here in the Alameda Park Addition, commercial development was prohibited. But just beyond our borders, small business was booming.

In past posts here on the blog, we’ve explored a few of those places, including Hunderups, at NE 29th and Prescott (today’s Food King Market); Alameda Grocery (today’s corner of NE 24th and Fremont); Davis Dairy Store at NE 30th and Killingsworth; and Grant Park Grocery at NE 33rd and Knott.

Here’s a look at three more markets, all of them clustered close together near NE 33rd and Prescott. We’re interested in hearing memories about these places or finding photos from the past. Can you help?

Today it’s the Community Health Center, an acupuncture and Chinese medicine office, but it started out as a store. Ever noticed the parking lot just west of the building, making it perfect for a gallon of milk or a loaf of bread on the way home? Built in 1921 as a grocery, this building was known for most of its life as Bradford’s Market, operated by Paul and Bernice Bradford from the mid-1920s until the mid-1950s. The Bradfords lived in Alameda at NE 30th and Mason (nice commute). Following its long run as Bradford’s, the store was known briefly as the Serv-Us Grocery, owned by Roy and Hazel Turnbaugh. From the early 1960s until the late 1970s, the building was the dental office of Dr. Herman Reisbick. Most recently, before becoming an acupuncture office, it’s been a barber shop and hair salon. 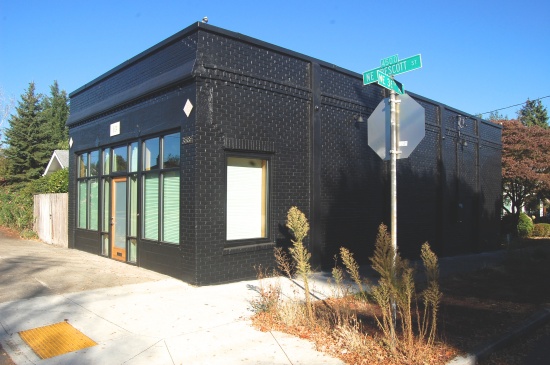 This is a notable building today with its fresh coat of black paint and recent makeover as an arts studio (Affiche Studio). And it’s been memorable in the recent past, as an upholstery business with a bright blue paint job.

This handsome one-story brick structure was built in 1924 by Joe Dellasin, and was operated in its early years as the Marble Palace Grocery and Market by George A. Peters, who owned another market by the same name near NE 15th and Fremont. Several proprietors ran it through the 1930s and 1940s before it became Prescott Foods, the name that stuck with the business through multiple mom-and-pop owners up until the mid 1980s (Loomis, Breshears, Dickerman, Patrick and Wallis). Grace and Earl Dickerman ran the business from 1948 until 1966 when they sold it and bought a small hardware store on SE Hawthorne. By 1985 the building had succumbed to the changing grocery shopping patterns of nearby residents (like most other small neighborhood groceries), and it became an upholstery shop, which it served as until 2012 when Affiche Studios moved in and fixed it up.

This one is an oldie: 1910. We haven’t yet been able to determine its business name prior to 1930, but by then it was known as Thirty Second Street Grocery, operated by Henry C. Parker. In the 1930s, it was owned by the Skoog family, which owned and operated other markets in Portland. In 1940, it was well established as Smith’s Cash Grocery, a name that stuck into the late 1950s.

One local resident remembers this place in the 1950s as Doc’s Market, and can recall going in as a very young person saying “Hi Doc!” to the shopkeeper (who he remembers as having a flat-top haircut and a big smile). Grove M. Smith was the proprietor all those years, and probably was the “Doc” behind the counter.

City directories show the building as being vacant from the 1960s until recently, when it was transformed into an arts studio called FalseFront Studio.

We’d love to learn more about these buildings, see pictures of their earlier selves, or connect with family members of past owners. We’ll share what we learn, and will keep plugging along with research on several other storefronts nearby.