In the joyful and serendipitous way so much research happens—bumping into one thing while looking for something else—we’ve run into a short article from April 1920 that sparked our curiosity about the renaming of a short street here in Alameda. Take a look:

Elsewhere here on AH you’ll find a piece we’ve written about the naming of Alameda’s streets. It seems all of the names in the Alameda Park plat have a connection with the founders of the Alameda Land Company: Hamblet, Dunckley, Bryce and Gile were either investors, family members or business partners of company president Edward Zest Ferguson. A bit self-important maybe, but not so unusual back in the day.

But Laura has always been a mystery. Glenn Avenue is a head-scratcher too, but that street—today known as NE 32nd Place—starts and ends in subdivisions well away from Alameda. Laura is a local name on an 800-foot long street that begins and ends descending the Alameda Ridge from Regents to Fremont.

Before we could get to the question of why her street was renamed, we first had to address the question of Laura: who was she? We’d looked before, but not hard enough. This time, equipped with a hunch and some genealogy tools, we found her.

Our namesake Laura was Laura Hamblet, daughter of Harry Hamblet, the money man behind the Alameda Land Company. Born in Astoria on February 22, 1895 to Harry L. and Mary A. Hamblet, the young Miss Hamblet was 14 years old when her family moved to Portland and her dad and his partners named a street after her. The Hamblets never lived in Alameda, though Laura must have always felt unusually connected to a place featuring streets with her own first and last names. The Hamblets lived in a fine large house on SE Harrison Street at 7th Avenue, which is now a parking lot.

Laura and her younger siblings Edwin and Mary (and their domestic helper, a young woman from Sweden named Anna Shalin) lived a comfortable life in their Harrison Street house. Based on the number of references to the Hamblets in the social pages of The Oregonian, Harry and Mary were successful and influential. While trying to get a sense of these people, we even ran into a photo of Laura Hamblet on the first day of riding season at the Portland Hunt Club, February 20, 1916. She was 21.

With the first mystery solved—a question we bet hasn’t had a living answer for many years—we could move on to reading between the lines of the April 7, 1920 news story to figure out who, and why someone would want to rename Laura.

That trail led us to the City of Portland Archives and Record Center, which is a good place to find yourself if you’re out of living answers. The Oregonian reported that a petition had been raised in protest by residents of Laura Avenue, so we launched into microfilm of Public Works Department records from March and April 1920, and sure enough, there it was: a letter from Dr. Thomas Wynne Watts, resident of 874 Laura Avenue, today’s 2840 Edgehill Place (remember, Portland’s streets were renumbered in the early 1930s).

In 1920, just 10 years after Alameda was platted and before the homebuilding boom of the 1920s, Thomas and Helen Watts and their family of five were the only residents with a Laura Avenue address. Read his letter carefully:

So, did you catch that? Watts and his family had been ordering their groceries by phone, some of which were probably delivered by bike from Anderson’s Grocery at 24th and Fremont, which was the done thing in those days.

That fact alone got our attention, a pre-Amazon moment of local delivery. Imagine the delivery person either on a bike or in a “machine” as autos were called then, mistakenly heading off to Laurel Avenue, wondering why someone almost all the way to the top of the hill on Southwest Vista, or on a short two-block street just south of Johnson Creek near SE 60th, would be ordering groceries to be delivered from the Alameda neighborhood.

Or maybe that was just Watts’s cover story for not liking having to explain to his colleagues that he lived on Laura. Who knows. The piece in The Oregonian implies they just didn’t like the name. Did the Watts know Laura Hamblet? Possibly.

Watts was a well-known Portland dermatologist who moved to Laura Avenue in 1919, just one year before filing the petition, and moved away to southwest Portland in the early 1930s. His children—son Holbrook and daughter Hannahsue—were elementary school age at that time and must have ranged free across the empty sloping lots of Laura Avenue before houses began popping up in the mid-1920s. In a sub-current of personal tragedy that surely eclipsed the petition and renaming, the Watts four-year-old daughter Sara Margaret died in the home on March 9, 1920, four days after her father submitted the petition letter, following a short bout of influenza. A younger son, Thomas Jr., who also became a doctor, was born in the house in 1921.

Four weeks after receiving the petition from Dr. Watts, Commissioner of Public Works Asbury L. Barbur responded with this recommendation to City Council: 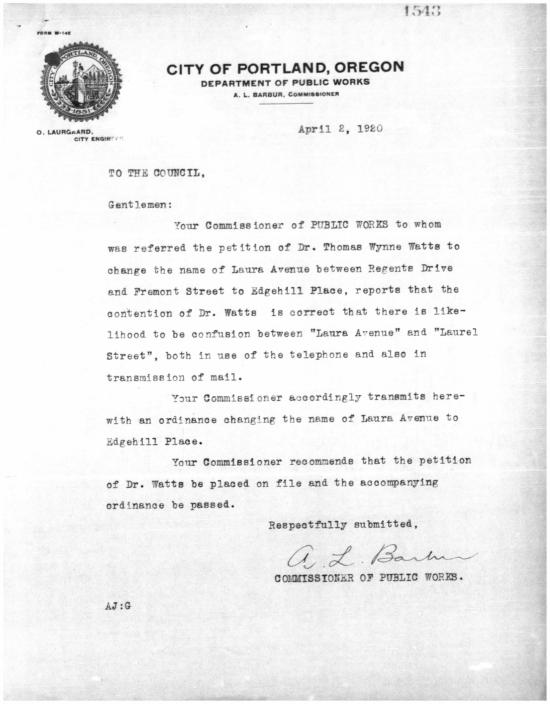 City Council agreed and on April 21, 1920 unanimously passed Ordinance 37170. Laura was out and Edgehill was in.

No explanation remains of how Watts came up with Edgehill, or other possibilities he may have considered (did he think of Holbrook, or Hannahsue, or Sara?). The topography of the street seems self-explanatory enough.

Nor is there record of how Miss Hamblet felt about the renaming. Later that year she married Fred Breske and they began their family—welcoming her own daughter Laura—and lived out their lives here in Portland. Laura Hamblet Breske died in October 1963. Did she ever come back to visit her namesake street?

Evidence of Laura Avenue is still around, stamped clearly into the curbs of Edgehill Place, reminding us of another time and a different reality.

And lest you think we planned to write about two young women whose names are cast in concrete all in the same week: nope, just an unusual confluence of research and observation.