We’ve been focusing this spring on NE 15th and Fremont, which has seen significant change during the last 100 years, including zone changes, multiple demolitions and major commercial construction, and the coming and the going of the Irvington Streetcar.

Throughout all this change, there’s been one steady witness at the northeast corner of the intersection that has seen it all: the former Anderson’s Grocery Company building, 1501 NE Fremont. Today it’s Daddy Mojo’s Cafe, and it’s had a long and interesting history. Here are two views about 20 years apart that will help turn back the clock.

Looking east on Fremont at NE 15th, May 1963. Taken as part of a petition for a zoning change that would eventually remake this intersection. Courtesy of City of Portland (OR) Archives, (ZC 4309). A2011-013. Click to enlarge the photo…there’s lots of detail there. 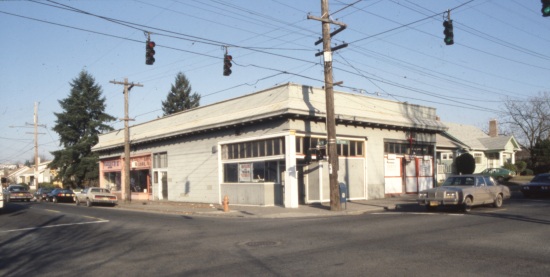 A similar view from 1985. In this photo, the ANP Market was in the process of becoming Roxanne’s, and the Fremont Pharmacy was the Full Holy Ghost Mission Church of God, Inc. Courtesy of City of Portland (OR) Archives, A2008-008.2113. 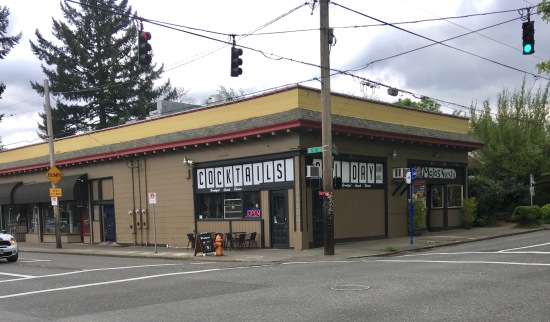 Built in 1923 by Andrew W. Anderson, this Mom-and-Pop corner grocery fed the neighborhood for many years, first as Anderson’s Grocery Company and then as the ANP Market. In the 1970s it served as a district office for the Multnomah County Juvenile Court.

Today’s sushi restaurant next door was Fremont Pharmacy from 1923 well into the early 1960s when it became a variety store. During the early pharmacy years, the business also doubled as the designated public polling place for the neighborhood in the mid-1920s.

We’re digging deep into the various chapters of this building’s stories (Anderson’s Grocery Co., the ANP Market, the district office Roxanne’s, Mojos and everything in between) and welcome memories and stories from AH readers. Drop us a note with your recollections (doug@alamedahistory.org) and we’ll share what we learn.