Maybe you’ve noticed the busyness and fresh coat of paint on the former church building at the southeast corner of NE 23rd and Sumner. If you haven’t walked by in a while, go take a look to admire the copper gutters, leaded windows and the crisp simplicity of this building form that has been adapted by four separate congregations in its 106 years. 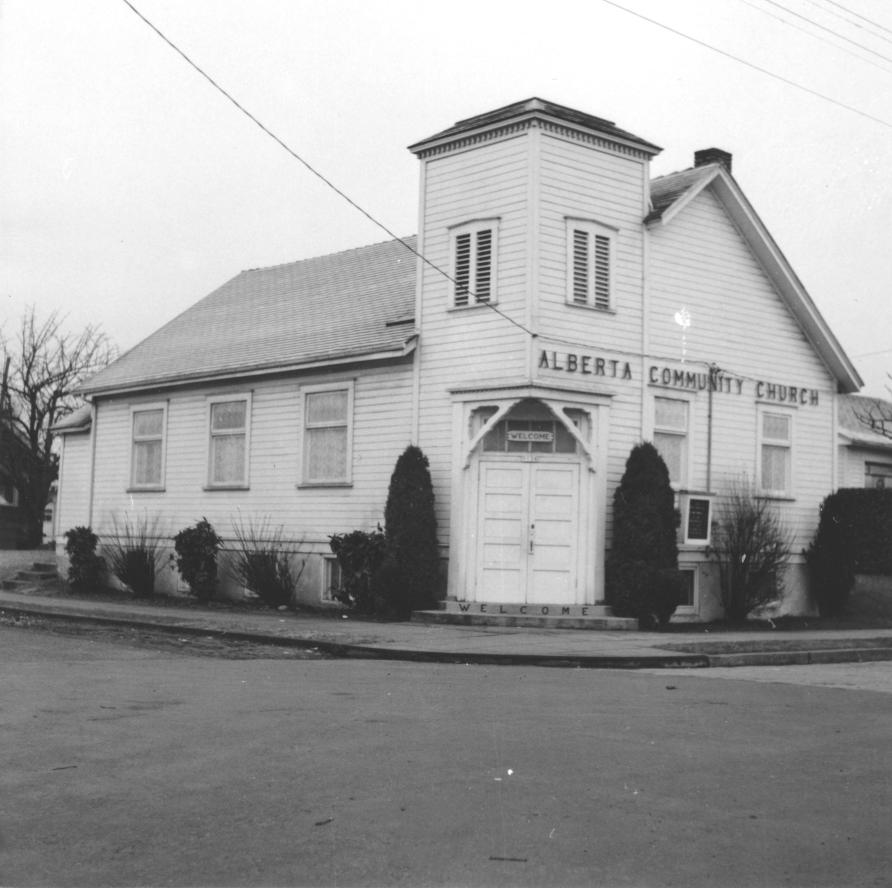 Known since 2004 as The Little Church or TLC, a one-floor event space operated by private owners and a rental apartment downstairs, the building sold in 2021 and has been a pandemic-era passion project for new owners Matt and Yuka Hollingsworth who have carefully restored, repurposed and renamed this stately time traveler.

Today this wood-framed building is known as Mildred Hall, taking its name from the east-west street upon which it is situated. Sumner was originally called Mildred Avenue in the 1903 Vernon Addition Plat, but renamed during the 1920s. Downstairs at Mildred Hall is Sumner Studio, an art studio for classes, workshops and shared studio space.

Today’s Mildred Hall started out as the Norwegian Danish Congregational Church, built on its vacant lot in 1916 by Norwegian immigrants as a spiritual center for members of the Scandinavian immigrant community living on Portland’s eastside, and distinct from the other Scandinavian faiths present in town. Church services and Sunday school classes were entirely in Norwegian, signage was in Norwegian and even construction was Norwegian in accordance with design standards set in the old country. Entrance to the original building was once in the center of the west wall.

The Mennonite Church began renting the building from the Norwegians in 1929 then bought it outright in 1938 making it the only Mennonite church on Portland’s eastside, which became known as the Alberta Community Church. Big changes were made then including moving the primary entry to the northwest corner, adding the faux bell tower and excavating a basement for kitchen and study rooms. The Mennonites added more space in 1958 and then outgrew the building altogether in 1965, selling to the Portland Korean Church.

From 1965-1977, the building was the center of Korean cultural life in Portland. In addition to its regular attendees who came from across the Metro area, the church welcomed families with adopted Korean children who wanted their kids to have a connection with Korean identity, offering classes in language, history, art and dance. The church was also well known across Portland’s port facilities as a place for Southeast Asian merchant marine sailors to come for religious services, support and fellowship. By 1977, the popular church outgrew its space and moved into a building downtown.

In 1980, the building became the Fellowship Church of God, which in 1986 also acquired the former Alberta Masonic Lodge across the street to the west as the flagship building for its growing Black congregation. With the shift of use to the larger building across the street, Fellowship leaders repurposed the older and smaller church building as an extra kitchen, basketball court, classroom and storage. By 2004, the Fellowship Church of God outgrew both spaces and later relocated to NE 122nd.

For the Hollingsworths, Mildred Hall has been a labor of love. They’ve served as general contractors and been involved in every construction decision along the way, and there have been quite a few including insulation, windows, HVAC, ceilings and generally trying to harmonize design elements across the multiple eras of change visible in the building.

Clean up after paint removal. Photo courtesy of Matt Hollingsworth

Most importantly, they wanted the building to continue bringing people together, just as it has throughout its life.

“In a city that is tearing down old buildings to make money off of new builds, we have ensured that this building will be a part of the neighborhood for many more years,” writes Matt.

The couple has opened Mildred Hall and Sumner Studio for free community events such as movie nights, flea markets and parties for local residents to get to know their new / old neighbor. It’s available for rent for private gatherings as well. Time to go take a look.