We’ve come across a remarkable piece of propaganda recently that offers a unique look into the earliest days of Alameda Park. It’s a brochure that provides photos and some very creative narrative, all designed to get potential buyers into Alameda Park.

It’s different than the small brochure you might have seen. This is a three-color (black, yellow, green) glossy, multi-fold pamphlet.

Interesting to note how the photo/map view below right is facing east, with Mt. Hood in the distance, instead of the typical north-south orientation. See what other interesting details you can find, like all the steamships in dock. Be sure to check out the “Rustic Rest Resort” on the cover, which looks more like a coastal cabana than something you’d find in the woods and fields of this new neighborhood. We think it was a gazebo like “porch” perched somewhere along the Alameda Ridge.

Click on the image for a full-size look at the map and the text.

Text and images in the brochure go on to talk about the many virtues of the property—descriptions that are a bit ironic since when this went to print, the “Tuxedo” was little more than gravel streets, some concrete curbs, mud and brush.

Another distinctive feature is the way in which the proponents boldly benchmark and shamelessly rip off nearby Irvington, which was established, successful and featured solid property values. Check out this panel:

The green text is faded, but it’s pointing out that tiny patch of mud and trees at the far north end of this lovely Irvington street view, as if to say: “Alameda…it’s up there.” Throughout the brochure, Alameda Land Company boosters tried to build their own credibility on the back of Irvington (which was developed earlier and by a different company that didn’t much appreciate this kind of attention).

And here’s one that took some real initiative: calling the Irvington School the Alameda School. Just to be clear, this is the original Irvington School. There was never a school like this in Alameda. Period. It’s a bald-faced lie in black and white. 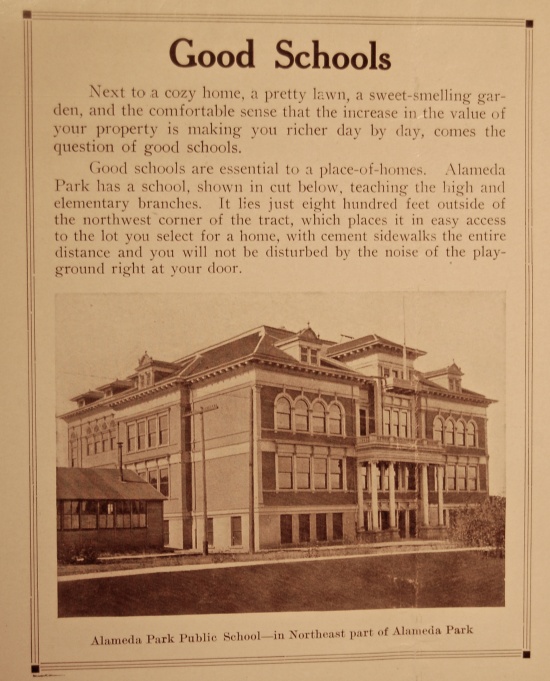 Don’t believe everything you read: there was never a school like this in Alameda…it’s the original Irvington School.

For us though, always in search of more information about the Alameda Land Company, the real gems of this brochure include the photo of the company’s tract office, which was located on the southeast corner of 29th and Mason. Check it out:

Looking east on Mason, just west of NE 29th Avenue. Note that the streetcar tracks have not arrived yet. A later photo taken from nearby looking north shows the railing and a banner that reads “Alameda Land Company Tract Office,” which appears to be on the roof too.

And saving the best for last: this view of NE Regents Drive, looking downhill, long before the neighborhood we know today. About as close as we get to time travel.

With thanks to our friends at the Architectural Heritage Center for sharing.