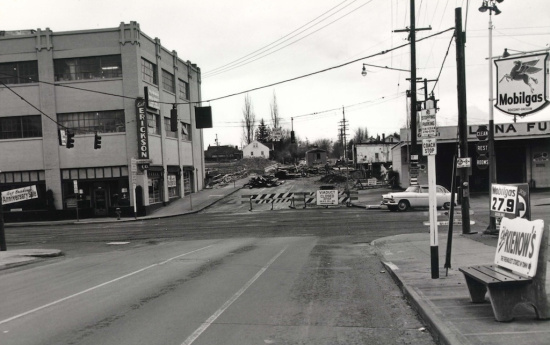 Looking south on Northeast 33rd at Broadway about 1956 during construction of a new viaduct over the Banfield Freeway. The former Oliver K. Jeffery aircraft factory is on the left. Courtesy of City of Portland Archives.

When it comes to time travel here in the neighborhood, one of our favorite old timers is the former Gordon’s Fireplace building on the southeast corner of NE 33rd and Broadway. We take it as a small history victory that recent marketing for the building includes the context that it was once for a very brief interlude an aircraft factory, which we brought to light in this post from November 2012, which includes photos from inside the upper floors and is filled with background on the building.

What’s happening with that building today is not new news, but in case you haven’t seen, here’s a link to plans from developer Interurban, which is planning an $11 million overhaul to create three floors of creative offices and retail space, plus a penthouse and outdoor decks, with completion planned for summer 2019.

And here’s some very old news we’ve come across: the 1916 newspaper story about factory construction, which took what had been a shed built by the Oregon Home Builders and upgraded it into a full manufacturing hub for the built-in cabinets, shelves, window and door casements and furniture that went into the company’s homes.

Since our post a few years back, we’ve come across a couple of other tidbits: check out these two great photos and story from the January 1, 1918 edition of The Oregonian about Oregon spruce in the war effort. Take what it says about the building with a grain of salt.

From The Oregonian, January 1, 1918. The table on Portland firefighters was a bonus thrown in by early editors jamming the New Years’ edition full of interesting facts. A similar story appeared in aviation and lumber related publications about this time, likely part of a PR campaign carried out by O.K. Jeffery.

Hold on a second…the reality of what was actually going on with that building is evident in a news story from January 20, 1918 explaining the building, which had been vacant after O.K. Jeffrey’s airplane factory folded–apparently in late 1917–had been sold to Portland Box and Excelsior and was well on its way into a new manufacturing realm. Check it out:

We’ve been thinking about this building lately because we’ve been exploring the company that built it—Oregon Home Builders—and company president Oliver K. Jeffery. We had the occasion on a recent evening to visit with neighbors and friends in the Alameda neighborhood home O.K. Jeffery built for himself and his wife Margaret in 1915. It’s a beauty—one of Alameda’s five national register homes—perhaps Portland’s largest Dutch colonial revival building, built as a show house for Oregon Home Builders. The house fell on hard times in the 1970s when it served as a halfway house for wayward boys and then sat vacant for seven years. But today, thanks to the last two history-conscious owners, it’s been restored to the look and feel of the O.K. Jeffery years.

At the moment, we’re working on a profile of the Oregon Home Builders that we’ll share here soon. OHB was prolific between 1912-1917, designing and constructing hundreds of homes and commercial buildings and even speculating in Willamette Valley farming property before going bankrupt when Portland’s economy went south in the late teens. It’s a fascinating story mirrored by the unusual story of Mr. Jeffery himself, the son of an old Portland family, reportedly founder of the Rose Festival parade, real estate speculator, lifelong MAC Club member, auto enthusiast, pilot and visionary aviation entrepreneur. Oh, and he was a corporal in the tank corps during World War 1 too, though he never saw active duty.

Somehow, after bankrupting the company and leaving stockholders in the lurch in 1917, and then closing down  his airplane factory after its very brief life, Jeffery was able to stay active and visible in Portland’s business and social scene, attracting heavyweight local investors to his aviation ideas. In 1920 he launched the Oregon, Washington, Idaho Airplane Company with an eye to establishing regional scheduled passenger flights, long before aircraft could actually carry many passengers. The business didn’t take hold, and Jeffery survived that ending too and went on to become a local distributor for airplanes built by Curtis and Avro. And a pilot. We guess he may have been happiest just flying people around. Here’s an ad for his business. Just a great big ride. Maybe that’s who he was in a nutshell.

Jeffery eventually found his way back to the mortgage business in 1926 when he opened First Bond and Mortgage, which vanished from the public record after the Depression. By then—after the divorce—he had moved in with his mother in a big house in Northwest Portland where he lived quietly until his death at age 46 in December 1936.

Makes you want to know more, doesn’t it? Stay tuned.