With thoughts about snow in the air, let’s turn back the clock to 1911.

From time to time, AH reader and Portland photo collector Norm Gholston sends along a gem or two from neighborhoods we know well—and some we’re still learning about. Here’s a killer image Norm shared recently, a “real photo” postcard from 1911 that shows a mom and pop grocery from Killingsworth Avenue at the southern edge of today’s Arbor Lodge neighborhood.

There’s so much to see and think about in this photo. Click in for a good look and we’ll share some insights: 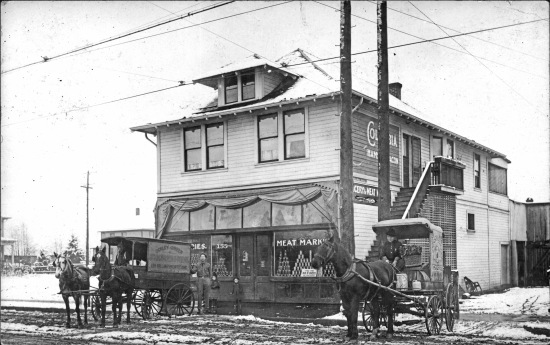 As the writing on the wagon to the left says (and the numbers on the window to the left of the front door suggest), this is 155 Killingsworth Avenue, which before Portland’s Great Renumbering was actually 155 West Killingsworth. When you map that out today, it takes you to 2225 N. Killingsworth, located on the north side of the street just east of the N. Omaha Tree Way, a four-block-long Arbor Lodge boulevard.

Here’s where this is today, first by map, and then by Google Streetview 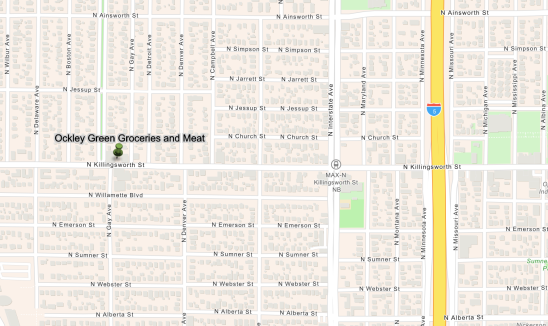 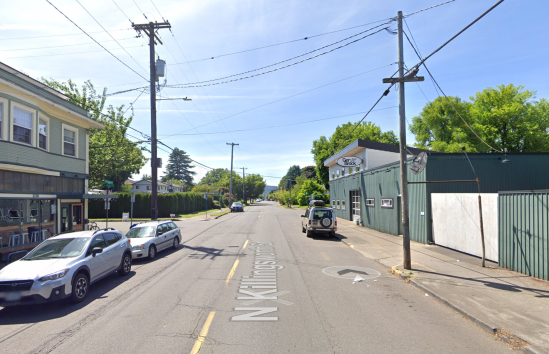 In this contemporary Google Streetview image, the horses and wagons would be parked near the utility pole in front of the white gate. 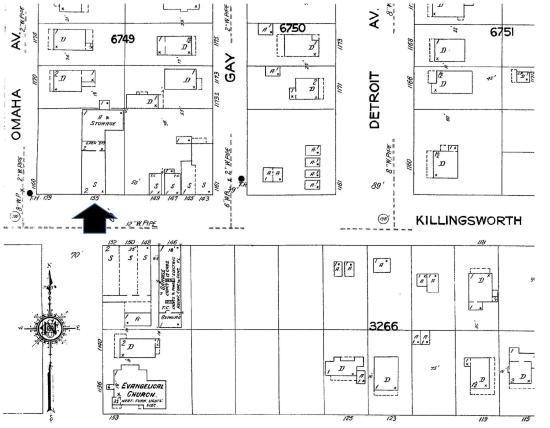 Interestingly enough, there must be some remnant of the old market building underneath the existing structure of the auto shop that exists at that address today, because a plumbing permit still on file for that address tracks back to construction of the market building in July 1909, and tells us it was indeed a store.

The wagon on the right, with the grinning driver in his great gauntlet gloves, buttoned-up tunic and basket of greens, is driving for Pierson Brothers Grocery, also housed at 155 W. Killingsworth (look very carefully at the writing on his wagon). What was in that drinking jug on the far right next to the kerosene can?

Neither the Pierson Brothers nor Ockley Green Groceries and Meat appear in any of the Polk city directories either side of 1911 when this photo was taken, but don’t tell these guys that. We’ve scoured through newspapers and other business listings of the era and don’t find reference to these businesses either, though the grocery operated for years after the photo was taken. Help wanted ads from 1910 sought an experienced meat cutter to come in on Saturdays. Perhaps that’s when the fresh meat arrived from the nearby Portland Union Stockyards.

Be sure to appreciate the school girls: the younger girl on the right pulling a sled; both are layered up in their wool coats and hats and good winter boots.

Some clever volunteer editor has scratched out the words under the sign near the stairs, readable between the two utility poles. Yes, we can read “Grocery & Meat Market.” No, we can’t read whatever you crossed out. Was it a person’s name? The scratch-out edits were applied directly to the postcard, not to the actual Foster and Kleiser sign. Why?

Thanks to the 1910 census, we know who is living up those unpainted stairs, behind the open screen door. It’s Frank B. and Margaret Ford, who built the building. Ford was a real estate speculator dealing primarily in grocery stores like this and other simple first-floor commercial properties. Frank and Margaret bought and sold many properties on the eastside over the years and when things got tight, Frank took some liberties with certain documents, which got him arrested in 1929 for real estate fraud. But in 1909, he knew the right place to build a market with the new and booming Overlook neighborhood all around.

Be sure to note the rails running east-west on Killingsworth, visible in the far left bottom of the photo. This is the St. Johns car line. In the 1890s,  somewhere nearby behind the photographer was the re-load point where the steam train came and went to St. Johns and riders transferred to the electric trolley line that ran east and then south toward Portland. A station was built here–at the corner of Killingsworth and Omaha on the south side of the street–and it was called the Ockley Green Station; later it served the electric trolley that went all the way through to St. Johns. You’ll find dozens of references to it in early newspapers of the day. Real estate ads selling houses or renting apartments all say “near Ockley Green Station.” No need for an address or even a cross-streets, everyone knew where Ockley Green Station was (though, thankfully, some did explain Omaha and Killingsworth was the spot).

There’s another mystery we’ve been puzzling over that will remain unsolved for the moment (we’re not without our hunches): the name Ockley Green taken by the station and the market, and eventually the school.

Here’s what we know for sure: 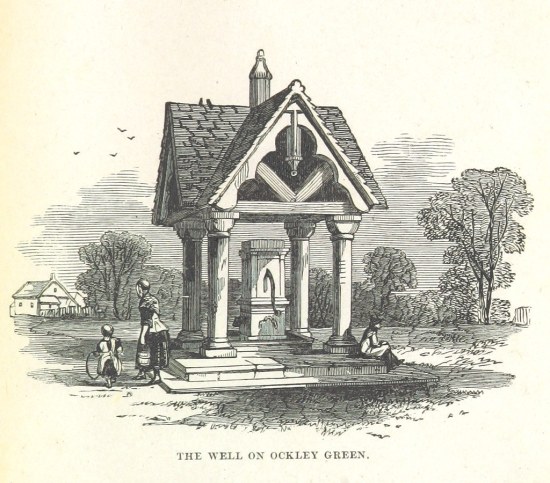 We’ve had a good look around on this naming mystery, talked to the Arbor Lodge Neighborhood Association, consulted all of our usual helpful print and public document sources and even stumped a few research librarians. The definitive story behind origin of the name Ockley Green has apparently slipped away, at least for the moment. We have our hunches: immigrant Portlanders with roots in Surrey saw something about the open landscape of the early neighborhood that reminded them of home, and it was comforting to have the place and the memory with them. We completely understand this.

Meanwhile in 1911, it was snowing at 155 West Killingsworth and the grocerymen were still delivering, the kids ready for adventure.