We’ve had the opportunity recently to research another prolific and talented architect from the early days of Northeast Portland. If you live in the neighborhood today, you probably know and have even been inside one of the buildings by architect Charles Walter Ertz: the Beaumont Market at NE 41st and Fremont. Take a look:

More on that Beaumont market corner in a moment…

Born in California in November 1887, Charles W. Ertz came to Portland as a teenager and acquired his architectural education mostly as an apprentice working for two of Portland’s leading architects, Joseph Jacobberger and Emil Schacht, both of whom designed homes in northeast Portland neighborhoods. Jacobberger designed the original Madeleine Parish school and church, and interestingly, years later, his son Francis designed the brick main sanctuary at Madeleine.

Ertz began his own practice with partner Lewis M. Dole in 1911 and later partnered with builder Edward C. Wegman as Ertz and Wegman for several years when the economy picked up following World War 1.

By the early 1920s, Ertz was back on his own until 1935 when he partnered with his employee Tom Burns to become Ertz, Burns and Company. He moved from Portland to Lake Oswego, where he designed and oversaw construction of several local landmarks there including the George Rogers Building at the corner of State Street and A Avenue (1925); the Jantzen House, on the island in Oswego Lake (1936); and his own beautiful Tudor revival home at 1650 North Shore Road (1928).

Some of Ertz’s other memorable works include:

The former clubhouse and restaurant at the Lloyd Golf Club, which was demolished last year (don’t get us started, it was a beautiful building);

The Eighth Church of Christian Scientist at 3505 NE Imperial.

Back to the Beaumont corner of NE 42nd and Fremont: One of Ertz’s challenges with that 1935 project was to blend the design for his new market building into the existing context of the neighboring building. The multi-peaked tile-roofed commercial building just west of Beaumont Market was built in 1928. Most people visiting the corner today wouldn’t guess that they are actually two separate buildings, built seven years apart. That’s thanks to Charles W. Ertz who blended new with the old. Neither of those buildings were in place in the 1927 Beaumont photographs we’ve recently shared here.

An interesting note: that distinctive original building (the one that houses Gazelle and the other storefronts today) was designed and built by Shipley & Snashall, who built quite a few commercial corners on the eastside, including the building that today houses Peet’s Coffee at NE 15th and Broadway. Next time you pass by, have a look for the family resemblance. 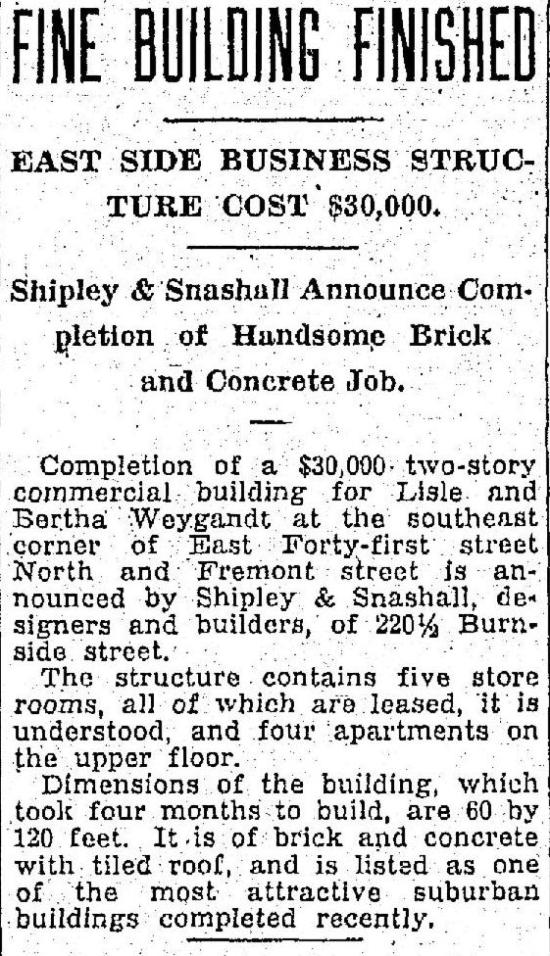