Regular readers will remember our recent post about the mystery of Crane Street, that interesting short and narrow road that disappears weirdly into a fence along the eastern curb line of NE 21st Avenue, and then re-emerges briefly in vestigial pieces a few blocks east on NE 24th. It’s a fascinating story of dueling subdivision plats, activist neighbors and the redrawing of maps.

Recently, we heard from neighbors along the street who knew something interesting must have happened, but weren’t quite sure what. Here’s a note from Joel Schipper on NE 24th:

We were thrilled to see your story on Crane Street — that’s our driveway/curb in the two pictures in the blog.  We’ve seen the writing in the concrete before, and in the four years we’ve lived in this house, we’ve discovered the remaining bit of Crane street over between 19th and 21st.  But we never knew the whole story — so thank you!

As a bit of ‘extra info,’ when we moved in, we found that this driveway shared with our neighbor, was essentially useless in that neither of could drive an SUV, sedan, or truck up it without scraping on the bottom, unless we essentially went up at a 45 degree ‘sideways’ angle.  So the ‘newish’ looking concrete in the picture is our collaborative hiring of a contractor to re-contour the driveway — after how many years?  Since 1924, which would be soon after this portion of Crane Street disappeared?  Both of us then had to rebuild our side walls — ours is pictured, and we hope this Spring to cover it from the bottom up with a climbing ‘native’ plant (Yarrow?), and with a spilling native — Kinickinick is already planted.

One last tidbit … two years ago on “National Night Out” in August, we hosted a block gathering on what was billed as the “Ghost of Crane Street,” a BBQ in the wide driveway.  We had neighbors who had lived on the block nearly 30 years and had never met each other!  And most were unaware of the Crane Street “driveway.”

We think it’s so cool how history has brought these neighbors together like never before, and that the ghost of Crane Street is alive in imaginations.

Right now we’re working on the mystery of Laura Avenue, the street that disappeared from use after Elwood Wiles and Company had already set the name in stone in the grid of Alameda street names. What was all that about? Who was Laura? Who suggested Edgehill?

On a recent walk, we encountered some buried Northeast Portland history that demanded investigation and made us think of a scene from an old movie.

Do you remember that last shot at the end of the original 1968 Planet of the Apes when a distraught, time-traveling Charlton Heston collapses to the beach as the camera pans back and in the distance we see the top of the Statue of Liberty, half-buried, sticking up through the sand revealing the beachy landscape he was riding across was actually the middle of New York Harbor? Kind of like that, but not really. We did not fall to the ground.

In this case, sticking out of the pavement and sidewalk in an otherwise normal neighborhood block were remnant clues to a stretch of street that no longer exists: NE Crane Street where it once passed through the southwest corner of the Alameda Park subdivision. It was called East Crane Street before Portland’s Great Renumbering created the four quarters of the city we’re familiar with today. Take a look at what we found:

Clues to what once was. Curb corners mid-block on NE 24th Avenue where Crane Street used to pass through. Today, the former street is occupied by houses, garages and driveways like the one shown here. Looking north on the west side of the street.

Cast into the this corner curb now marooned mid-block is a barely visible “CRANE ST.” Today, the nearest part of Crane Street is three blocks west.

Today, Crane Street makes a short run from NE 19th to NE 21st, but it used to go all the way through to 24th. It’s always been a narrow street, a bit wider than an alley, but not much. Go check it out, and then walk NE 22nd, 23rd and 24th and look hard along the alignment of where Crane used to go, you can see clues to its past: fully formed curb corners that are now driveways. CRANE ST. stamped into the abandoned curb at mid-block. Even the crown of now-gone Crane Street—the gentle sloping away from centerline—can be seen on NE 24th where Crane used to intersect.

When we found those clues, we had to know more, so we visited our favorite source of official documents: City of Portland Archives. From official records—ordinances about renaming and street abandonment (a process called “vacation”), and petitions from neighbors—we were able to piece together an understanding of Crane Street.

First, let’s remember—from our earlier exploration of what we’ve dubbed the Prescott Jog—how strange things can happen when adjacent development plats filed at different times by different developers bump into each other. This unique little stretch of Crane Street exists at the junction of four plats, each filed by a different developer at a different time: Hillside, 1894; Vernon 1903; Alameda Park, 1909; George Place, 1910. (Check out our collection of local plats that might be of interest.)

It’s probably also worth noting the topography here: this is the edge of Alameda Ridge where other streets have a hard time getting off the hill: NE 21st zigs and zags and feels like an alley as it tries to find the crest of the ridge before becoming a real street and heading downhill to the south. Mason doesn’t even bother going through: it turns into a footpath through the former orchard on the slope of the ridge. And NE 19th is impassable: it gets stuck in a cul-de-sac where it gives up and becomes a flight of stairs. 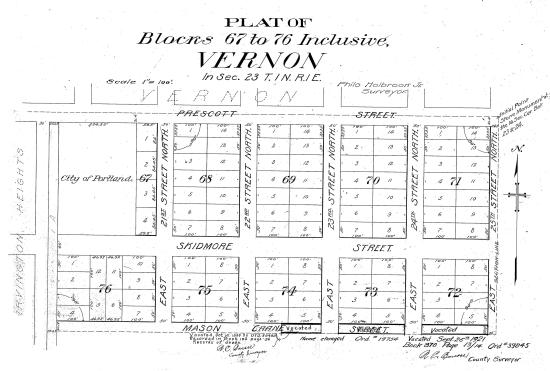 This detail of the Vernon plat shows it all. Crane Street (once named Mason) appears at the bottom of the map, with detailed notations of a name change and two “vacations” or street closures and abandonments. Click to enlarge. Yes, this is part of the Vernon plat, though the city thinks of this area as Alameda. Read more about the difference between plat names and neighborhood names.

The Hillside plat of 1894 locked a single slice of Mason Street onto the map that other developers tried to line up with in the following years. In 1903 when the Vernon subdivision was carved from the surrounding forests and fields, Crane Street first appeared as Mason Street, trying hard to line up with the short stretch of existing Mason Street in Hillside and the Mason Street further west in an existing plat called Irvington Heights. Because the new Mason and the old Mason were so far out of alignment, local residents at this very south edge of Vernon petitioned the city in 1909 to just change the name of the street (which was still gravel) from Mason to Crane in an attempt to reduce confusion. When Alameda Park came along a few months later, the newly re-christened Mason became the chosen alignment for the Mason Street we know today.

Eugene Snyder, Portland’s leading authority on street naming, suggests the Crane namesake may have been either George Crane, an agent for Equitable Life Assurance Co., or Samuel Crane, agent for New York Life Insurance Co. We couldn’t find any logical connection to the area for these two Cranes, or any other Crane for that matter.

In 1921, a majority of property owners along East Crane asked City Council to vacate the stretch of Crane between NE 22nd and NE 24th. Along with the citizen voices was a strong letter of recommendation from Commissioner of Public Works A.L. Barbur, explaining: “this portion of Crane street is slightly less than 28 feet in width and does not in any manner form a ‘through’ street which can be rendered useful for general traffic.” Council unanimously approved the request on August 31, 1921. Soon after, the property formerly known as Crane Street between 22nd and 24th was purchased from the city, added to the Vernon plat as new lots, and homes were built. The left-over stretch of Crane between 19th and 22nd was still gravel.

In July 1930 another group of neighbors brought a petition to vacate their own stretch of Crane between NE 21st and NE 22nd, and another recommendation letter from Commissioner Barbur: “This portion is not improved and its vacation will in no wise affect the remaining area of the street, which connects with East 21st street on the east, thus affording a connection to the streets to the south. The property in this vicinity is all in residential usage and the proposed vacation will not be detrimental to the value of the surrounding property.”

A page from the petition signed by neighbors in 1930 to vacate East Crane Street between 21st and 22nd. Courtesy City of Portland Archives.

Council unanimously approved the request on October 15, 1930, and that property was purchased, replatted and built.

Today, five houses sit at least partially in the middle of those two vacated stretches of the former East Crane Street between 21st and 24th, made possible by the involvement of neighbors trying hard over 20 years to enforce order on a jumbled and frankly bumbled set of plats symptomatic of Portland’s chaotic early planning history (read about the weird Prescott Jog near NE 33rd).

Makes us wonder if maybe today’s Crane Street neighbors between 19th and 21st ought to get together for a block party to have a chat. Someone send for Commissioner Barbur…

P.S. It looks the neighbors have indeed wondered about this mystery and given the street stub its own appropriate name: check out the Ghost of Crane Street.