Every once in a while a photograph comes along that completely pulls you in with so many stories to tell. Here’s one you’re going to want to spend some time with.

We were at City of Portland Archives this week researching a piece we’re writing about the 1929-1930 widening of East Broadway, which completely transformed what was a sleepy street into the major arterial we know today between the Broadway Bridge and Sandy Boulevard. It’s a fascinating, sad, complicated, inevitable story that we think you’re going to enjoy reading about.

In the process, we ran into this picture of an intersection many of us know well, anchored by a building we’ve written a lot about. There is so much to see in this photo: you’re going to want to click to enlarge it and climb inside to see all there is to know. 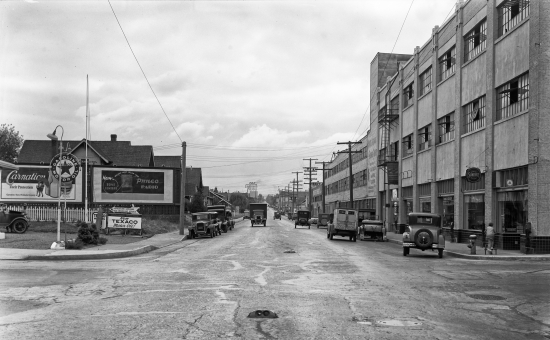 The main building on the right was built by Oregon Home Builders in 1916 and served briefly as a manufacturing site for aircraft parts during World War 1. You can read more about that here and see some other photos of the building and the intersection from a different angle.

The tallest portion of that building is actually a freight elevator (which we’ve had a chance to ride in…the largest freight elevator in Portland, or so it was explained to us). Painted on the exterior of the elevator tower is an advertisement for wholesale hardwood flooring. The building continues quite a ways east into what is a parking lot today.

Looks like heavy storage was popular even then: a banner advertises heated space with trackage (the rail runs just the other side of the building). And how about the grocery, beauty parlor and even a cafe in the first floor retail space. Who knew?

The Texaco on the left is still a filling station. And see the billboard at the far end of the street advertising the Hollywood Theater? On the north side of the street, the Frank L. McGuire company has a bungalow for sale.