We’ve been thinking these days about the history of the big green giants that anchor the block at NE 19th and Prescott. In our last post we learned about the “Vernon Standpipe” as it was called, and the challenge in the 19-teens of keeping it filled with enough water to supply the neighborhood that grew up around it. That is, until this tank came along almost exactly 100 years ago.

In our first installment, we left our expectant City Commissioners at the corner of NE 57th and Fremont with a shovel in their hands ready to dig a 14,280-foot long trench for a big new pipeline that would push more water from the Mt. Tabor reservoirs into our thirsty neighborhoods. 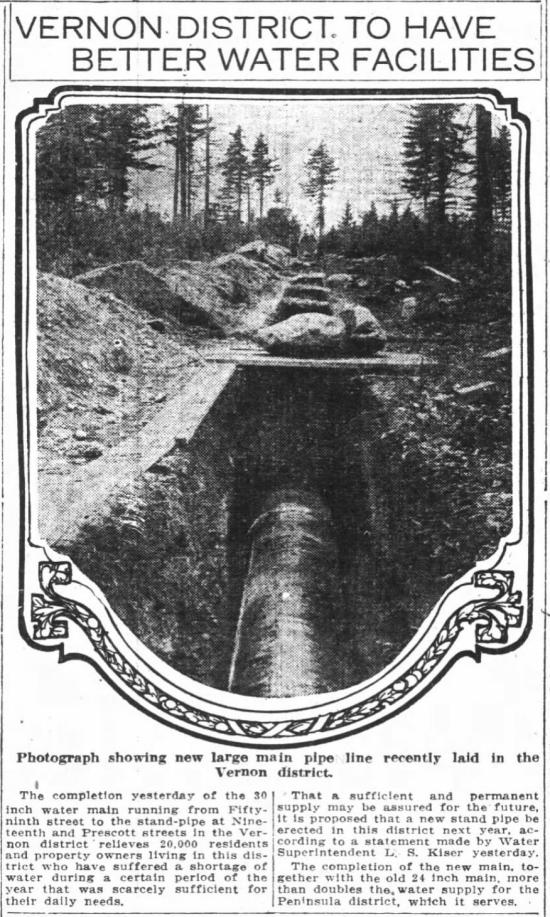 From The Daily Oregon Journal, August 8, 1915. This wooded street scene is likely somewhere along NE Skidmore before the residential neighborhood we know today had taken shape.

The pipeline dig began on April 16, 1915 powered by 59 unemployed men hired from the city’s standing civil service list. By May, workers at both ends of the project were working toward each other. Promises had been made to alleviate the water shortage by summer, so momentum was important and the newspapers took note.

From The Oregonian, May 16, 1915. Interesting to note that the picture in the lower right shows the intersection of NE 24th and Skidmore, the spot where this water main broke in March 2019 flooding homes and local businesses.

By July 1915, crews had met in the middle and the golden spike moment seemed close at hand:

These were the headlines everyone wanted to see and even though the big pipeline job was done, Water Board engineers knew volume and supply were only part of the equation. The hand-me-down Vernon Standpipe just didn’t have sufficient storage capacity to keep up with the growing need here and on the Peninsula. But the new main bought time for more thinking and engineering.

Water officials must have been relieved that the most pressing problem over the next few years seemed to be finding someone to paint the 100-foot-tall, 25-foot-diameter Vernon Standpipe, expressed in this September 19, 1917 headline: LOFTY PAINTING JOB GOES BEGGING. No bidders, so the standpipe’s bare panels became its trademark.

By August 1920, the city announced plans for construction of a new 1 million gallon storage tank for the site that would replace the 350,000 gallon Vernon Standpipe. And fortunately for us, a city photographer documented the progress, which went like this (double click into any of these for a closer look…there’s lots to see):

By late summer 1920, workers were busy on the plumbing for the new tank and establishing a concrete foundation that would support the tower and the million-gallon tank above. The water alone weighed 8.3 million pounds. This view is looking north from the tank site; the houses are on the north side of Prescott. 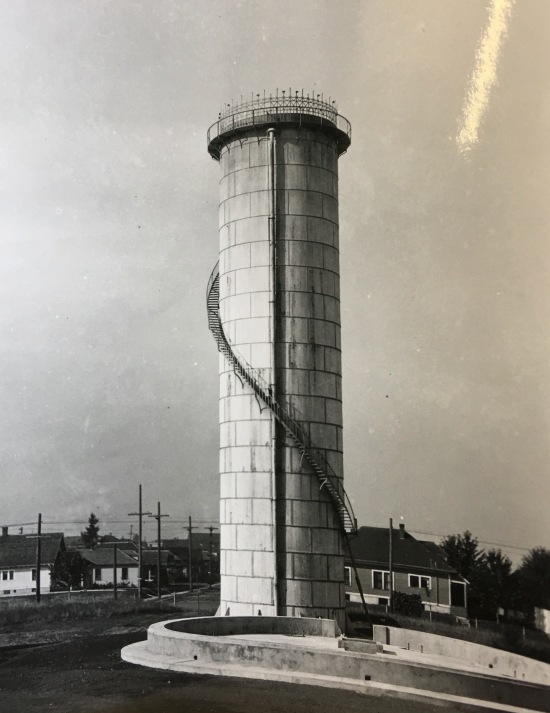 By the fall of 1920, the round base had been poured (foreground) and was ready for tower construction. This view is looking north showing the standpipe behind (nice stairway and railing, eh?), and the T intersection of NE 19th and Prescott.

By late 1920 or early 1921 the new tower and tank are taking shape. This view looks north with the standpipe behind and snow on the ground.

In this view looking north in early summer of 1921, workers are in their shirtsleeves and the tank is done.

In August 1921 the city paid Portland-based Le Doux and Le Doux Construction $10,477 to dismantle the former Vernon Standpipe (underway in this photo) now that the new tank was in place, and to relocate the pipe to a new venue in St. Johns at the corner of N. Princeton Street and N. Oswego  Avenue, where it stands to this day (below), still in service at more than 120 years old:

Next up: The 1920 tank is eventually dwarfed by the biggest tank in the nation.