Thought we’d bring back up to the top a post from a few years back that has new meaning this week. Gordon’s Fireplace Store at the southeast corner of NE 33rd and Broadway is closing. We bet you didn’t know that building was actually an aircraft factory for a short time, and that it was originally built by Alameda resident Oliver K. Jeffrey, who was the prime force behind Oregon Homebuilders, which was a prolific early building firm in Alameda and Olmsted Park before going broke in the late 19-teens.

Here’s a visual reminder of the Gordon’s we all know:

And here’s a link to our post that takes you inside the building, and the story from this week’s Oregonian describing the store closure. No word yet on what might be next for that building or that corner, but we have hunch the answer might look a lot like the neighbors to the west.

One of Alameda’s most prolific home building companies—The Oregon Home Builders, Inc.—is also responsible for building an aircraft manufacturing facility in the neighborhood that endures to this day.

You probably know this building as Gordon’s Fireplace Shop on the southeast corner of NE 33rd and Broadway. But in the late 19-teens, after serving as a workshop for house parts and domestic carpentry projects that now reside as built-in cabinets in homes across Northeast Portland, the building moved into full aircraft production mode and began churning out spruce struts, beams and braces for “flying machines.”

There is much to be written about Oregon Home Builders, Inc.—and we’ve been on their trail for several years now—but suffice to say its owners had a big vision. They founded the company on a business model that involved selling shares of stock at .25 cents each to investors at large, and building and selling homes. They also built some of Alameda’s prized national register houses, including the Oliver K. Jeffrey House at Regents and Shaver, and the Thomas Prince House at Alameda and Regents. Others, including the George Eastman House on Stuart Avenue—designed and built by Oregon Home Builders—should be on the register.

In 1914, the company built 45 houses here in northeast Portland, and drew plans for many more. As a base of operations for this big vision, Oliver K. Jeffrey and his colleagues needed a workshop and warehouse near the market they were serving, and near transportation. So in 1915 they set out to build a warehouse on the Oregon Railway and Navigation Line in Sullivan’s Gulch, today’s Banfield corridor. Here’s a snippet that’s a tad fuzzy but readable from the January 17, 1915 pages of The Oregonian. 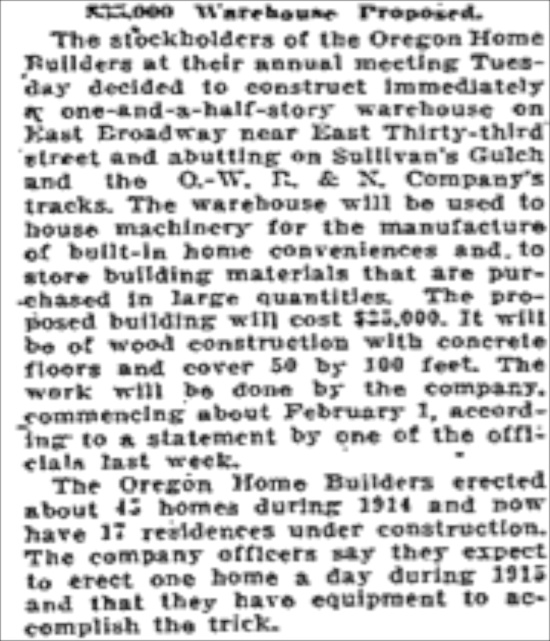 But by 1917, O.K. Jeffrey’s passions—and the Oregon Home Builders warehouse—were focusing more on airplanes. A flamboyant character in Portland business and social life, and a man of means, Jeffrey received much coverage in the pages of The Oregonian during these years, whether in his role as a top Rosarian, his very public divorce proceedings, or his role as a brave tank commander during World War I. The story below in the August 1, 1917 edition focuses on the airplane factory building at 33rd and Broadway.

The O.K. Jeffrey story takes several more interesting turns, including bankruptcy for Oregon Home Builders by 1918, further innovations in aircraft design and operation, and his untimely death due to blood poisoning from a freak accident in December 1934.

Much more to come about Mr. Jeffrey, his company, and the homes they built, but back to the airplane factory in our midst.

Perhaps like us, you’ve driven by the building a million times and wondered about it. Following on that curiosity, and hoping for clues to the company that might have been forgotten in some nook or cranny in its upstairs floors, we dropped in for a visit over the weekend and can offer the following observations:

The folks at Gordon’s are helpful, and interested in the history of their building (which they’ve been in since 1990), but their collective memory of the building can’t see back around the corner of time. They do have a story here and there about a pasta manufacturing company that once inhabited the building. Some sense of the retail furniture company that operated there for 30 years. And a fabulous picture from 1929 that was first and foremost a portrait of Union Pacific Engine 17 coming around a bend in the track, but secondarily a picture of the building. See the distinctive brick pattern along the parapet? Look also how the building extends quite a ways east around the bend of the gulch.

Looking east in Sullivan’s Gulch on January 20, 1929 at Union Pacific Engine 17. The “Beaver State Furniture” building is no longer an aircraft parts factory. The building wraps around the rim of the gulch. Note also how much narrower the gulch is…widened in the 1950s to make room for the Banfield Freeway, requiring replacement of the viaduct. Photo courtesy of Gordon’s Fireplace Shop.

Check out this image below as well, which shows our aircraft factory building in 1956 as Erickson’s Furniture. The new viaduct associated with construction of the Banfield freeway (I-84).

Looking south on Northeast 33rd at Broadway. Construction of a new viaduct. Courtesy of City of Portland Archives.

During our visit this weekend, we learned that the building houses the second oldest freight elevator in Portland, and it’s big. Like a two-car garage that levitates between the first and third floors. It doesn’t take much imagination to see it filled with furniture or spruce airplane parts. But pasta? Hmm.

A detailed look at aerial photography of the area over the years (with thanks to Ed McClaran), confirms that the building did indeed once extend east across what is today’s parking lot, and connected up with the building that now houses Rose City Furnishings in the 3400 block of Northeast Broadway.

The view from the top floor is impressive: both up and down Sullivan’s Gulch to the east and west. North across the busy intersection toward the Dolph Park neighborhood. But there are no hidden nooks or crannies with artifacts from Oregon Home Builders. It’s a tidy and well-organized warehouse on the upper floors. Here and there you can tell from marks on the floor where heavy machines and equipment may have been anchored, or workbenches secured to the walls.

No aircraft machinery to be found here. Just a warehouse for Gordon’s Fireplace Shop.

But the aircraft heyday of the building has passed and it stands on the north rim of Sullivan’s Gulch as an artifact itself while the busy intersection below surges with traffic and big development plans are underway for the blocks to the west. In the midst of the shuffle and change, it’s a time traveler with stories to tell. 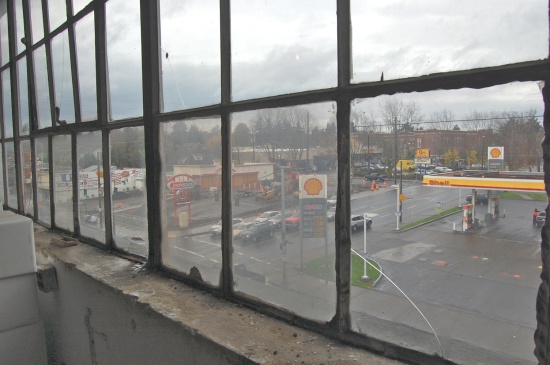 There are more than 200 articles here containing hundreds of photos, documents, maps and other items related to the early history of Northeast Portland neighborhoods. Check out our list of favorites or select a category to begin exploring.