Ready for a little time travel?

AH reader Sam Parrish was browsing around here on the blog recently and found a photo that captured his imagination. It’s the shot looking north on NE 19th Avenue just north of Thompson, taken about 1910 that illustrated a brochure about the new Alameda Park subdivision. Like us, Sam enjoys lining up in the footprints of the past so he went for a walk to find the exact spot and rephotographed it. Here, take a look: 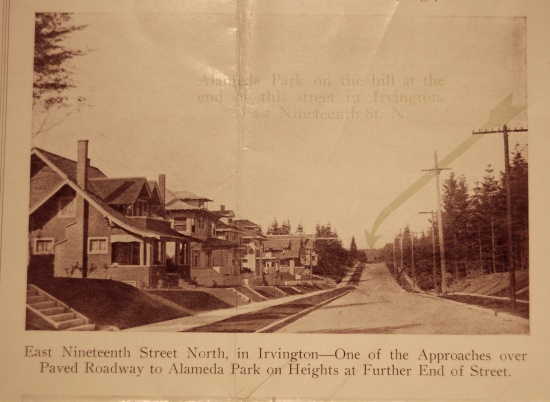 The photo was one of several in the 107-year-old brochure that tried to establish the credibility of Alameda Park by referencing the well-established Irvington neighborhood to the south. The green text in the old photo is faded, but it’s pointing out that tiny patch of mud and trees at the far north end of this Irvington street view, as if to say: “Alameda…it’s up there.” At the time of its publication in 1910, the Alameda Park neighborhood was still on the drawing board, so boosters shamelessly borrowed Irvington imagery to make Alameda seem like it actually existed. Go check out our post on that brochure which does feature some examples of our favorite views across the open fields of early Alameda Park.

What was it about that particular image that captured Sam’s imagination? He writes:

“These houses seem to stand right on the edge of civilization. The juxtaposition of the freshly built homes against the sidewalk-lined forest across the street forces one to consider what is lost when a city expands; the urban growth boundary just outside your door.  I thought it would be neat to see these same houses in their current state. Lost in the sea of neighborhoods. It was a fun mystery to solve. Since I knew this is now NE 19th and it is within view of Alameda ridge it seemed a simple matter to start where 19th jogs at Tillamook and look for the house with the double gabled dormer. It turned out to be only one block north, just past the intersection of NE Thompson and 19th.”

Since we’re on the topic of time travel and getting out for a walk to experience the history of the neighborhood (always a fun thing to do, particularly on a holiday evening with family or friends), check out these suggested local walks:

A walk around the Pearson dairy farm.

A walk along the Broadway streetcar route.

A walk around the perimeter of the Alameda Park plat.

Hoping you enjoy Christmas past and present this week, and best wishes for the New Year.

These fall evenings are great for a brisk walk. Leaves everywhere, woodsmoke in the air, raindrops. And local history ripe for the imagination.

Click on the map for a larger file you can print

The northwest corner of “The Park” (as in the Alameda Park subdivision) is a little confusing, particularly around Crane Street, which has been significantly changed over time (and is actually part of the Vernon plat). Rather than trying to follow the zig-zag of the property boundary, I just walked Prescott to NE 20th to the shadow of the big water tower. Then south to Alameda Drive and around the corner to 21st, then west on Ridgewood to 20th, and then left down the hill. When you are on 20th above the ridge, from Prescott to Alameda, you can see the difference in the neighborhood plats, with Sabin to the west on one side of the street with smaller homes on smaller lots.

Turning left (east) on Fremont, you have the long straight south edge of The Park to walk, passing by where the streetcar ran up 24th and the busy commercial hub that included the Alameda Pharmacy, the old Safeway (now the bank) and what used to be two gas stations. I think of the northeast and northwest corners of NE 24th and Fremont as the gateway to The Park because that’s where the streetcar ran, and because of the business district here.

Next, you pass east by the school, built in 1921 after much lobbying by the locals and a few protests that the construction contract was awarded through some favoritism (future blog post, stay tuned). The plats off to your right are Waynewood, the Town of Wayne and Edgemont, names long forgotten.

Tip your hat to the Pearson Pine, the big old ponderosa pine tree on the southeast corner of NE 29th and Fremont. It’s been there since at least 1885.

Up the hill you go. As you pass the staircases that head up to the top of the ridge, keep in mind there are old water mains under those steps, placed when they were built in the teens. At one point, maybe in the 1920s and early 1930s, women from the Alameda Tuesday Club acted as ushers for young children passing up and down these stairs on their way to and from school.

The crest of the hill at Fremont and 33rd is Gravelly Hill, which was both a gravel pit and garbage dump for many years. The dump was under the southwest corner, where a fine house sits today.

As you walk north on 33rd, think about the 33rd street woods (today’s Wilshire Park), originally part of the Kamm Estate, which was a dense forest that played a large part in the memories of youngsters who grew up there in the 1930s and 1940s. While you’re enjoying the evening, you can also tip your hat to the home guard, made up of Alameda dads, who patrolled the neighborhood at night during the World War II years, enforcing blackout rules and making sure families kept blankets and light dampers up on their windows.

And then there are the thousands of stories that rise up from the generations who have lived in the homes you’ll pass. Lots to wonder about as you and the dog push on around the corner at Prescott and head into the home stretch (being sure to have a look up the alleys north of Prescott as you scope your next walk). So nice to be out on a history walk on a brisk November night.

Next: Walking the route of the Broadway Streetcar.