Past and present are on course to connect in a humble 110-year old building on the southeast corner of NE 20th and Going in northeast Portland’s Vernon neighborhood.

This long, narrow, white clapboard-sided building was built in 1907 and purchased in 1914 by Tifereth Israel, an Orthodox Jewish congregation with roots in Russia and the Ukraine. Later it served as an African American church. 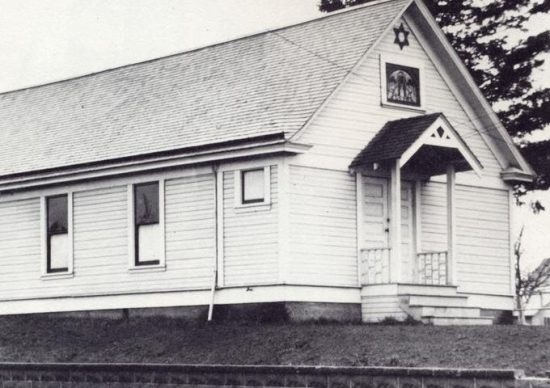 This undated photo shows Tifereth Israel, a synagogue from 1914-1952. The building later became home to several African American church congregations, and most recently an art gallery and studio. A group of Jewish community leaders is now working to purchase and restore the building. Photo courtesy of University of Oregon—Building Oregon Collection.

The building in November 2017. Developers have been eyeing the corner lot for a tear-down. The Alberta Shul Coalition has secured an agreement with the current building owner to purchase and restore the 110-year-old building.

We bet you’ve seen the old building’s patient but somewhat tired grace, just west of the Vernon Practice House (from Old Vernon fame). Clearly not a residence, it presides over the intersection from its corner height.

Originally the center of Jewish life for a small handful of families on Portland’s eastside–many of whom lived within walking distance–the congregation expanded over the years to include up to 100 families. Known during those early years as the Alberta Shul (a Yiddish word meaning a place of study and prayer), the building drew together the eastside Jewish community. By the early 1950s, Tifereth Israel had outgrown the building, so the congregation purchased and moved into the former Redeemer Lutheran Church at NE 15th and Wygant.

From 1952 until the early 1980s, the building was home to several African American congregations, including the Mt. Sinai Community Church. In 1980, when it was sold to its current owner, the building was rented out for various purposes including religious gatherings and then eventually as storage space. In 2010 it became home to Xhurch (its current incarnation) a gathering and workspace for resident artists and musicians.

When the property was placed up for sale in 2016, members of Portland’s Jewish community learned of its availability—and its history—and began to organize an effort to purchase and restore the building. Their purchase proposal was in competition with developers interested in tearing it down and redeveloping the site, but the current owner was intrigued with the restoration project and has since entered into a contract with the coalition for purchase.

Today, the Alberta Shul Coalition is raising funds and support to transform the building back to its earlier role as a place for meeting, learning, community and prayer for the eastside Portland Jewish community.

Eleyna Fugman is one of the founders of the growing coalition. Her vision is for a special, simple gathering place for local Jewish residents to connect through a variety of community-driven programming, as well as a space that northeast neighbors could rent and use for meetings, classes and events.

“The fact that we could work, play and practice in a building that our ancestors built and made into a Jewish home is very important,” says Fugman. “There are many young Jews who are looking for a place to be Jewish, who are yearning for Jewish community in some format.” The coalition’s vision is that Alberta Shul can be a cultural venue for Jewish art, music, learning, and gathering as well as a place for traditional and alternative religious services and prayer.

The coalition is interested in gathering insights about the history of the building and the generations of families who knew it first as a synagogue and then later as a church. During its years as a synagogue, the 1,000-square-foot building drew people from many areas east of the Willamette River, including neighbors who lived just across the street, and some who came from as far away as Oregon City.

As we’ve seen, the Alberta business district exploded about the time this building was built, and Going Street was known for its neighborhood mom-and-pop grocery.

Eleyna Fugman is intrigued with the eastside presence of a vibrant Jewish community during those days, notable since the most established Jewish neighborhoods—and largest synagogues and congregations—were in south and southwest Portland.

Rosters of past Tifereth Israel members—which can be cross-referenced against city directories from earlier years—can help better illuminate the presence and extent of Portland’s eastside Jewish community. Some original records and other items survive from the early days and were saved when Tifereth Israel was absorbed into northwest Portland’s Congregation Shaarie Torah  in the 1980s. Stories and memories are beginning to emerge. The Alberta Shul Coalition has begun to find and meet a handful of former Tifereth Israel members who recall the building and its community.

The current building resident, Xchurch’s Matt Henderson, has been in touch with pastors from the building’s days as an African American church, and has helped connect and open conversations with members of the Alberta Shul Coalition. The coalition is interested in knowing more about the transition from synagogue to church, which was strongly supported by the Jewish community at the time and which created consternation in the then largely white neighborhood (more on that in next week’s post, which will open a window into the subtle and not-so-subtle racism and discrimination of the mid 1950s).

We had a chance to visit the building recently and found some tantalizing clues to its former lives:

A stained-glass window in the eastern wall. Alert AH reader Robert Stoltz recognizes this as the Harp of David, a metaphor from Jewish tradition for physical and emotional health and healing. We’re working on understanding the un-accounted for seven years between 1907-1914 and how this building started its life, stay tuned for more on this. It’s pre-Great Renumbering street address was 972 East 20th Street North. 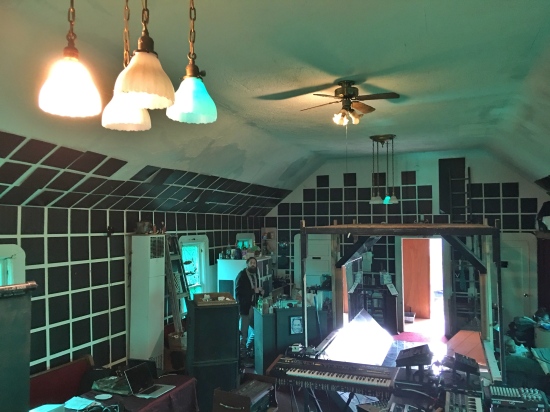 An interior that is alive at the moment with Xhurch art and music. The windows are tinted green producing an interior glow. Check out the original light fixtures with hanging chains and shades (the fan-fixture is relatively new). Not pictured here is a raised platform or bimah that may have also held the altar in later years. Original? Maybe. 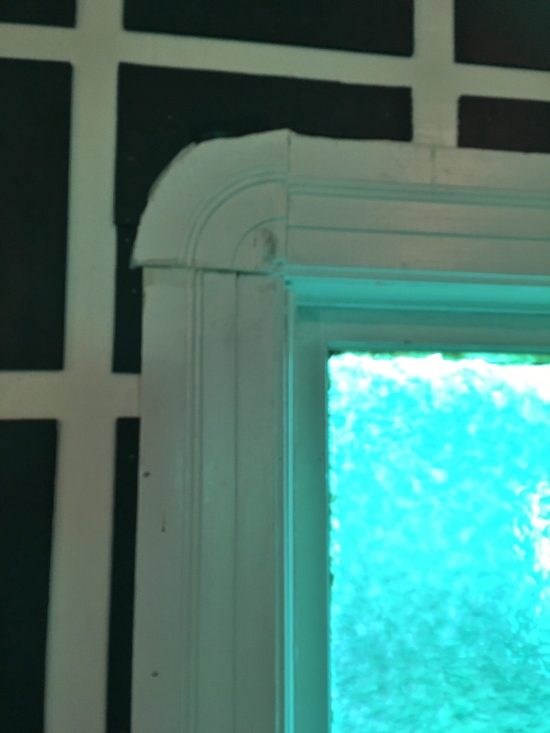 Beautiful and unusual rounded window trim, unlike anything we’ve seen in a building of this era. We’ve had a quick look at several interior photos from the 1950s (hoping to be able to share those here soon) that also show this distinctive woodwork. Could the trim have been original? Five windows in the north wall, five in the south wall—and interior doors—all similarly trimmed out. And all frosty green.

The entry, featuring weathered crucifixes from earlier years, a new grid of tiles from the Xhurch days, and clear indications of the restoration work necessary to upkeep the siding, trim, stairs, fascia boards and soffits, roof and just about everything else. Fortunately the building does not have a basement: no downstairs foundation walls that need to be shored up.

The Alberta Shul Coalition seems undaunted by the restoration work ahead. They’ve already raised about $40,000 toward the purchase and are targeting another $136,000 by March 2018 to fulfill the first part of their purchase agreement with the owner. After that, the coalition has set its sights on raising another $250,000 to begin the restoration.

We’re donating some research time to help learn more about the stories of the building and the families who knew it over the years. Maybe you’d like to make a donation toward purchase and restoration of this almost-forgotten neighborhood institution. To learn more, visit the Alberta Shul Coalition on Facebook. More to come about this time traveler here on AH.

Next up: The transition between synagogue and African American church in the 1950s brought out the best of both religious communities, but the worst of the neighborhood.

There are more than 200 articles here containing hundreds of photos, documents, maps and other items related to the early history of Northeast Portland neighborhoods. Check out our list of favorites or select a category to begin exploring.