We came across a great old photo recently of a proud apron-clad businessman standing, arms crossed, in front of his market at the corner of NE 15th and Killingsworth. It’s a photo worth having a look at. We’ve been staring at it for a while to puzzle through some of its riddles. 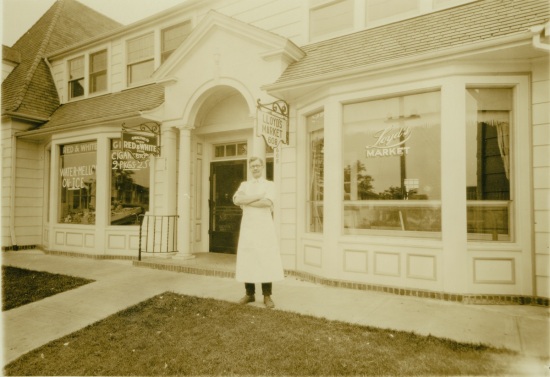 First, there is no identification. Who is this proud man? Second, there’s a spelling conflict: is it Loyd’s (as the window suggests) or Lloyd’s (as the shingle suggests), and how did that happen? What did Loyd’s sell? And when you really look at the picture you understand it’s actually two businesses: Gwaltney’s Red and White Market where the watermelons and cigarettes are for sale, and Loyd’s (or Lloyd’s, depending on which sign you read). Can you hear the spring in the screen door when it opens, and the door smacking back into the frame as it closes?

We do know where it is: the southwest corner of Killingsworth and 15th. Loyd’s was 608 and Gwaltney’s was 610. After some research, it became clear to us that the main entrance to Gwaltney’s was off the picture to the left, at the corner. More on that in a moment. These addresses translate to 1478 Killingsworth today. Remember, all of Portland was readdressed in 1931, so we know this photo was taken before that. We’re guessing 1929-1930. Built in 1927, the building still stands. A look back through permit history shows many chapters and changes: market, pharmacy, restaurant, tavern, pool hall, rented rooms upstairs, and now office space.

Here’s a look at that same view today. The portico is gone, the front of the building looks like it has been pushed out a bit, the grass is gone and Killingsworth has been widened, putting the early vantage point almost into the street. See for yourself: 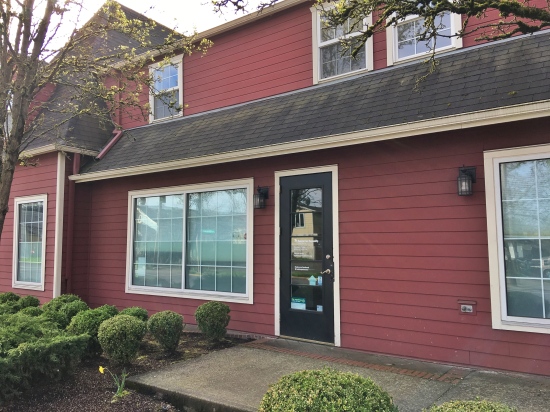 Next is the question of who this gentleman is. We believe this is actually Mr. Loyd in front of his store, not Mr. Gwaltney (who would have been posing in front of his own front door somewhere off the picture to the left). With the help of the Polk City Directories, census records and a few other genealogy tools, we believe this man is John F. Loyd (only one “L”). From 1929-1939 he ran a meat market at this address. For some of those years his son Clarence helped out in the shop. Loyd lived on Dupont Street near the Broadway Bridge (now gone under the Portland Public Schools building–Dupont no longer exists) with his wife Alma and children Clarence, Ruby and Lester. He was a WW1 veteran. John and Alma were born in Sweden and immigrated to the US in 1900.

Willis H. Gwaltney was the shopkeeper at the Red and White Store, off to the left. Gwaltney and his wife Martha lived just around the corner on NE 16th. He spent a career in the grocery business, his last assignment being at the Kienows on SE 39th and Lincoln. In the 1930s, Red and White markets were everywhere. Each was independently owned: shopkeepers could buy Red and White branded merchandise, marketing materials and even store shelving. In the mid 1930s, there were 6,700 Red and White markets nationally. We had several in the neighborhood…more on that in a future post. Gwaltney’s shows up in the Polk City Directory at this address from 1929-1933, when Willis moved on, likely a victim of the changing economy.

While out taking pictures of this building, which in 2017 is the home of Portland/East Metro Habitat for Humanity, we decided to knock on the door and share this picture with the current occupants. The very friendly Tim, who was at the front desk there, was welcoming and excited to see Mr. Loyd. Tim wanted to share an old picture of his own and took us into the back room to see a large format framed photo of the building hanging on the wall, shown below. The timeframe for this one is a bit later.

The Oakhurst Pharmacy is listed in city directories from 1940-1948, and if you look at the passerby’s hat, the ads in the window, the style of street sign, that timeframe fits. Gwaltney’s is gone. Lloyds is gone and the “welcome to my front door” sense of entering the building on that side has changed, Mr. Loyd’s proud perch now covered up with an awning and boxes. The street has been widened and grass replaced with concrete. Looks like they must have had a leaky roof too, the valley of that far gable reinforced with flashing. Here it is:

Oakhurst, by the way, is the name of the platted addition just west of the Vernon area between Killingsworth and Ainsworth from 14th to 19th, originally platted in 1892. We’re betting that name has faded away like so many of Portland’s other plats. Have you ever heard someone talking about Oakhurst? We haven’t.

Back then, Lee Witty was proprietor of the Oakhurst Pharmacy and he must have been a resilient person: the pharmacy appears multiple times in The Oregonian during his eight years in stories about several armed robberies, a fire that damaged part of the building, and even a major accident in March 1947. Check it out:

How much longer will this building last? Good question. It has certainly seen its share of change. Uncovering its story, like all the research we do, is about as close to time travel as we can get.