Walking and wondering about history go hand-in-hand, especially here in Northeast Portland. On a recent adventure down Concordia neighborhood alleys, we came across a distinctive building at the corner of NE 23rd and Sumner that made us wonder: what was that? Too big to be a family house; too small and house-shaped to be an apartment building. Maybe you’ve seen this and wondered too. Take a look: 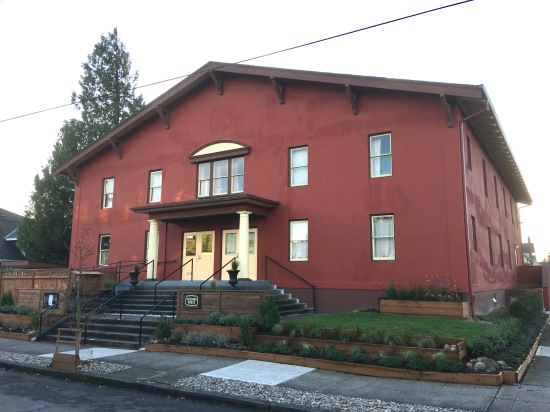 When you stand and stare for a moment, many possibilities come to mind: hostel, church, school, chalet, rooming house, theater. Hmm, what could it be?

How about fraternal lodge?

Yes, the two-story, bracket-eaved old beauty was purpose-built in 1923 as the home of the Alberta Lodge Number 172 Ancient Free and Accepted Masons. Here’s the news from July 1923 about the ceremonial placing of the cornerstone, and a construction rendering of the building: 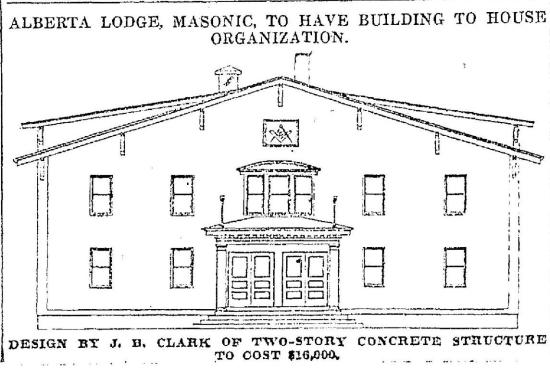 Those big gable-ended walls at front and back: they’re made out of concrete, formed and poured in place (all four walls are concrete, making moving a window or door no simple task, just ask the current owners). Inside, there were small rooms and chambers for the various aspects of the secret Masonic rites, and a beautiful theater-like gathering space. A kitchen, offices, cloak rooms.

During its heyday, the Alberta Lodge No. 172 had 450 members and was jammed busy on multiple nights each week, often with a ceremony and the many social gatherings that preceded or followed: picnics, breakfasts, dinners, work parties.

In 1986, with Lodge membership dipping to just 150 members—most of them senior citizens—the Masons decided to sell the building and consolidate several other shrinking lodges under one roof in Parkrose. Masonic elders came to reclaim the ceremonial cornerstone and extinguish its service in one last ceremony. A January 14, 1986 news story in The Oregonian quotes the wife of one former Alberta Lodge leader: “It’s been our whole life.” Another, reflecting on our changing society: “People live a different lifestyle these days. All the fraternities are dwindling.”

Following its time as a lodge, the building was the Fellowship Church of God until 2005 when that growing community moved first to the Doubletree Hotel near Lloyd Center then to a new and larger facility on NE 122nd. The space was rented on and off for several years, and served as the home of Heaven Bound Deliverance Center before slipping into receivership and an accumulated ocean of deferred maintenance.

That’s where current owner Randall Stuart and his colleagues found it during their search for just the right building to serve as a convening space for art, theater, music, learning and community.

The 8,000-square-foot concrete building was headed for demolition when Stuart and his team purchased it in 2013 launching a two-year renovation effort that involved restoring virtually every surface and moving part in the place. And then some: new interior walls and spaces, including a major interior stairway; an ADA ramp and exterior access; outdoor spaces and landscaping; a total overhaul of building systems.

Prior to finding the Alberta Lodge, Stuart and his colleagues had formed the foundation that now runs it: Cerimon House is a 501(c)(3) humanities organization dedicated to creating and celebrating community through arts and humanities.

“It’s definitely been a labor of love. Our board is very proud of saving the building and keeping it aligned with a fellowship mission” he says, tipping his hat to the generations of Mason families who have gathered in the space.

Today, the old Alberta lodge building is definitely back to life as gathering space for art, music, readings and lectures—and lots of other interesting events, including weddings, meetings and family gatherings (the space is available to rent). Stuart invites neighbors who want to see inside Cerimon House to book a tour online at the website or take a virtual tour to learn more: www.cerimonhouse.org