Homedale is the name of the property plat—once part of an orchard and dairy—that occupies the landscape bounded roughly by Fremont and Ridgewood, between NE 19th and NE 24th. Today, it’s considered part of the Alameda neighborhood. Here’s a look at the geography.

Detail from the Homedale Plat, filed in 1921. Click to enlarge.

Think of a plat as a road map filed by developers for organizing property into individual lots and streets (read more about the relationship between plats and neighborhoods here). We all live somewhere in a plat and each has its own unique story, players and moment in history. We’ve created a category here on the blog (The Plats) to hold our ongoing exploration of these stories.

While today it’s an orderly grid of streets and homes dating from 1922, less than 100 years ago the sloping landscape just below Alameda ridge that you see here was an important part of Portland’s eastside agriculture. We’ve come across several interesting descriptions that will feed your curiosity and the way you think about this landscape. Read on, from local resident Rod Paulson written in January 1976:

“Before 1921 and 1922 when city lots were staked out, much of this was an apple orchard, the remnants of which can still be seen in some back yards. The trees grew right down to the edge of the Fremont Street [side]walk and there were several old buildings on the place, residential and otherwise, including a large farmhouse painted light brown which was located close to Fremont in the vicinity of 21st Avenue. This house dated back to the 1890s or before and people lived there in apparent comfort in a rural setting, yet in the midst of modern houses that [were being built] in all directions.”

“There was another farmhouse set back a considerable distance from the street more or less in the eastern part of the orchard, and a barn was situated opposite the end of 23rd Avenue.”

We’ve wondered about this: are isolated apple trees from the early orchard days still out there scattered across this part of the neighborhood? Can any readers confirm? In a happy coincidence, the Sabin Community Association has planted a small orchard of young trees near NE 19th and Mason, on ground that probably once was part of the old orchard:

The once and future orchard, near NE 19th and Mason, December 2018.

Owners Michael G. Munley and James T. Barron bought the future Homedale property in 1905 for $6,500 and kept it in agricultural use with an eye to eventual development, but market conditions didn’t make that worthwhile until the 1920s. Not coincidentally, Munley was son-in-law of E.Z. Ferguson, president of the Alameda Land Company which owned land just up the hill. Barron was a Ferguson business partner.

The Irvington Dairy operated from a barn situated at the northeast corner of NE 21st and Fremont from the 1890s until 1916 when a catastrophic fire destroyed much of the herd and the barn.

From the Oregon Journal, January 11, 1916. The address given–725 Fremont–is from Portland’s old addressing system and translates into the NE corner of 21st and Fremont. We did not find a follow-up news story about the fire investigation. The house remembered by Rod Paulson was home to dairy manager Grimm and his family. 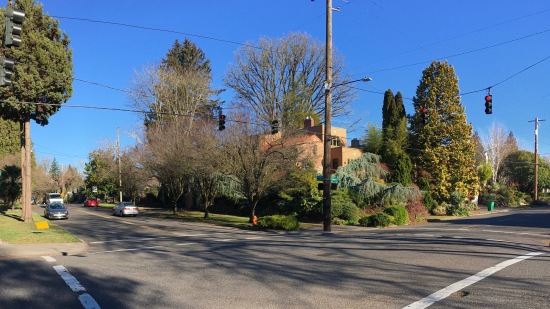 Between the terrible fire and an early 1920s resurgence in Portland’s real estate values, the time was nearing when Munley and Barron would execute the land use change and end the property’s agricultural past. In 1919, the Grimms and dairyman E.J. Bruns were selling off the last of the Munley herd:

A nearby dairy existed just to the east as well: the Pearson Place, the cow pasture where Alameda School was eventually built. The Pearson family operated their dairy there during this same time period and it too was subdivided into residential lots about the same time. You can read more about the Pearson Dairy and its time-traveling tree here (and we recommend putting on your walking shoes and your imagination to walk the perimeter of the farm).

Six years after the big fire at NE 21st and Fremont, Munley and Barron were underway with their plan to develop the property:

By the fall of 1922, the streets of Homedale had been carved into the south-facing slopes and the first homes had been built. Real estate ads even mentioned without explaining why that most lots had a fruit tree (but no mention of cows).

Interesting to note that prior to 1922, Regents Drive did not go all the way through to NE 21st because the orchard and open fields were in the way. Regents came down the hill and tee’d into NE 24th before heading south. Think of that next time you drive down Regents headed for NE 21st: the former orchard and pasture land you’re driving through.

If you’ve read this far, you deserve the reward of one of our all-time favorite news stories from that time illustrating the consequence of this early day change of land use from agriculture to residential (a subject that bears exploration in future posts). Dixon Place is the next subdivision to the west just a few blocks over, between Fremont to Shaver and from NE 15th to NE 19th, part of today’s Sabin neighborhood. What a great headline:

Dairies like the one at NE 21st and Fremont–and many more small dairies around town–occupied a unique niche in time as Portland grew between 1890 and the 19-teens. As population and growth exploded and property became more valuable for housing, the departure of the dairies was a bellwether of change. More from the front lines of subdivision-dairy conflict here. It’s a fascinating story.