It’s time for another Alberta Street merchant portrait to add to the growing collection. Meet the crew from Anderson’s Grocery Store Number 5 at 676 Alberta Street, about 1930. That’s 1816 NE Alberta today (thanks to the Great Renumbering). Sent by AH photo friend Norm Gholston, this one is definitely worth a close look so click in for a good look around.

Here’s a challenge: Think you can identify all of the produce on display? 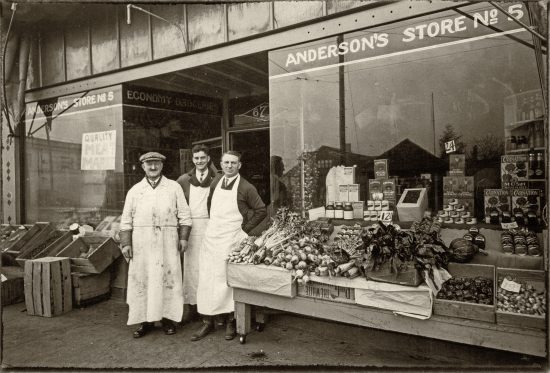 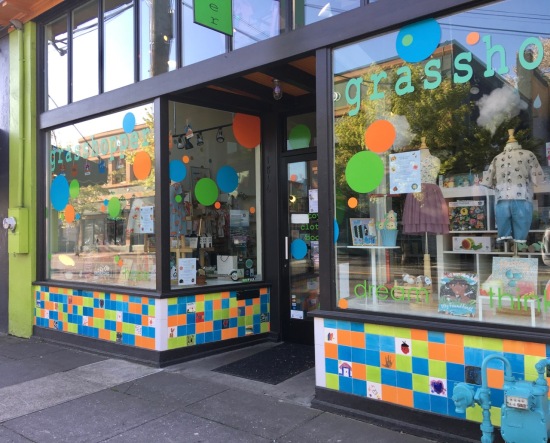 At its peak, Anderson’s Grocery was a 39-store chain of “cash stores” (all on Portland’s eastside) built by Carl G. Anderson starting in 1905, so called because there was no book of credit kept; business was “cash on the counter” only. This particular store was Anderson’s fifth and was well established by the time this photo was taken in the early 1930s. On the back of this photo are cryptic notes explaining that the young man in the middle was the person managing the store: James Franklin Frost.

Jim Frost was born in Selma, Oregon in 1905, married Emma Doering from Saskatchewan in 1927, worked for Anderson’s in the 1930s, enlisted in the service in 1943 and returned from the war to run Frost’s Grocery on the southeast corner of NE 30th and Killingsworth. He and Emma lived within walking distance of Anderson’s, and they ran small neighborhood mom and pop grocery stores all their lives.

We’re still working on the identity of the other two gentlemen—the butcher on the left and Frost’s stock clerk partner on the right. All of them in shirts and ties and shiny shoes, how about that?

Grocer Carl Anderson was a bit of an empire builder, and definitely thought of himself that way. This business profile, written not long after the photograph was taken, provides further insight into Anderson’s humble beginnings and rise to grocery stardom.

In the year after this story, Anderson opened a grocery in a new building at the heart of the Beaumont business district which we know today as Beaumont Market.

For the record, there was also an Anderson’s Grocery at NE 15th and Fremont, but that’s a different Anderson and a story for another day…