This week our full attention has been drawn to learning more about the area around NE 17th and Alberta during the period of the 19-teens, sparked by our hunt for Ford’s Pool Hall pictured in a recent vintage photo. But we’ve come across another photo and more about that block and the people who knew it during those years.

In our reconstruction of that part of the neighborhood from old directories and documents, we mentioned the presence of Gabel & Son Bakery next door to the east at 662 Alberta, that’s the building occupied today by Earl’s Barbershop and Bunny with a Toolbelt’s Window of Wonders. This week, we came upon this next photo that has stories to tell. It’s another sharp and beautiful shot that you’re going to want to have a good look at, so click to enlarge and soak it in (with thanks to Norm Gholston): 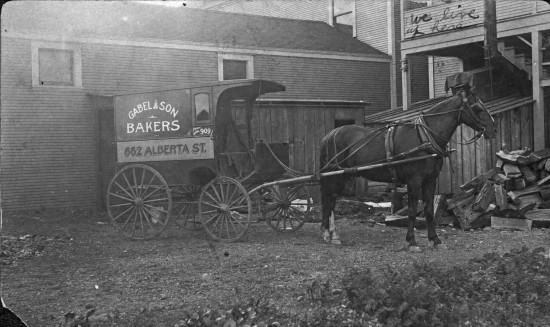 At the back of Gabel & Son Bakery, formerly 662 Alberta, today’s 1726 NE Alberta, about 1909. Click to enlarge. Used by permission of the Gholston Collection.

That pile of wood fired the bakery’s ovens. Looks to us like the shed-roofed enclosure on the side wall of the pool hall may have been a woodshed (see the ax just inside the door leaning up against the wall?). Did those white bags on the ground contain flour? See the damper control rod coming up through the other shed roof under the stairs connecting to the stovepipe to manage oven heat? How about the exposed knob and tube wiring bringing power to both buildings.

The more we’ve looked at and thought about this photograph—and have done some digging—we realized it shows the backside of that block of buildings. That means the one-story clapboard building with the two square windows, behind the wagon, is Ford’s Pool Hall, and the building with the stairs going up to the second floor apartment housed Gabel & Son Bakery, today’s Earl’s Barbershop.

So let’s plot that on an old Sanborn map, like this: 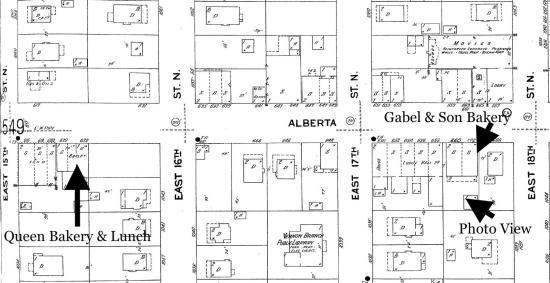 Here’s a contemporary view of that same scene in just about the same place. We looked closely: not many clues about the former one-story pool hall, or really anything prior to the major remodeling done on these buildings in recent years.

This great old photo made us wonder other things too, like who were Gabel and his sons? Who lived upstairs “we live up here.” What happened to the pool hall part of the building? AH readers know we like questions like these.

Gabel was George A. Gabel, born in Germany in 1845. He and his wife Mary and their five children came to Portland from Michigan’s Upper Peninsula in the early 1900s. He was a shoemaker by trade, but also ran a small farm with the help of sons George Jr., and Henry.  When they came to Portland the family established the Gabel & Sons Bakery which operated at 662 Alberta (1726 NE Alberta) from 1909 til about 1916 when George Sr. opened a shoe repair business just up the street. Son Henry took over the bakery business, opening a popular lunch spot at NE 15th and Alberta called the Queen Bakery and Lunch, which was a one-story old frame shopfront that occupied the space that is currently the parking lot just east of today’s Alberta Food Co-op. More on that in a moment.

The Gabel clan lived two blocks north in a big four-square on NE 16th Avenue, but son Henry, who was 27 in 1910, with wife Nellie and young son Clyde, were out on their own living at 662 ½ Alberta, which was the apartment upstairs from the bakery. That must be Henry or Nellie’s handwriting on the photo: we live up here.

As we learned more about the Gabels, we wondered could the “muffin man” in the pool hall picture standing next to George Ford—the older gent with goatee, cap and bowtie—be George Gabel? In 1909 he was 64 years old. Possible. For that matter, the young man standing behind might be his son Henry, or maybe Albert.

Detail from Ford Pool Hall photo. Is this George Gabel and his son? Our hunch is yes.

The Gabels were well-known and reputable business people and the family was connected with the Alberta Street area well into the 1950s (Henry retired in 1953). But most people of that generation would probably remember the family for actions of middle son Albert F. Gabel. This is where the story gets a bit sinister, and we realize we’re going down the rabbit hole a bit chasing this, but it is interesting and allowed us to turn up another photo of this section of Alberta Street, so bear with us.

Albert drove a bakery delivery wagon for his father and his brother Henry, perhaps the wagon pictured here. In January 1916 Albert, then age 24, was involved in what investigators determined was an accidental shooting of his girlfriend, Minnie Lee. It’s a long, sad story that we won’t go into except to say that Albert had become obsessed with Minnie—who at that time was separated from her husband. During what Albert described as horseplay, a rifle discharged, the bullet striking and killing Minnie. Initial news reports (and Minnie’s family) called it murder, but the DA backed off to a charge of involuntary manslaughter on the basis of evidence, and Albert was set free on bond to await trial and went back to driving the bakery delivery wagon. By 1916, brother Henry had opened Queen Bakery and Lunch up the street with his business partner Warner Illk, 622 East Alberta (remember, this is before the Great Renumbering). We’ve pointed out the Queen above at the far left of the Sanborn map detail.

In September 1916, Minnie’s widowed husband Jesse L. Lee, who had been living temporarily in Canada, came to Portland to settle the score, tracking down Albert on the afternoon of September 14th where he was sitting on the front steps of the Queen reading a newspaper and waiting for his next delivery. Jesse Lee walked up, asked Albert “Do you know who I am? Well, I’m Mr. Lee,” then fired two blasts from a sawed-off 12-gauge shotgun directly at Albert. The blasts hit Albert in the arm and shoulder, shattered the glass at the bakery, wounded a nearby schoolboy, and terrorized all of Alberta Street. Lee surrendered moments later without incident in a vacant lot at 15th and Wygant, pleased with himself for finally avenging his wife’s death, but disappointed to learn hear he hadn’t killed Albert Gabel.

Because this story had so many sensational ingredients, The Oregonian put it all over the front page of the next morning’s edition (it was too late to make the Oregon Journal, which was an afternoon paper). The next day, the Journal ran this photo, showing the late Minnie, Albert, and the front of the Queen Bakery and Lunch, with a white cross applied to the photo in the lower center showing exactly where Albert was sitting when Lee fired upon him.

It’s a bit grainy due to microfilming, but you can get an idea for scale. The two one-story storefronts are now gone and the barber pole to the right marks the eastern edge of the brick building that now contains the Alberta Co-op Grocery, 1500 NE Alberta.

You’re curious about what happened with Albert and Jesse:

We’ve seen a few other compelling old photos of this area of Alberta Street in the 19-teens that we’re going to continue to pursue, but for now we probably have just one more post in us about Ford’s Pool Hall and then we’ll shift gears a bit. Enjoy these great old photos.