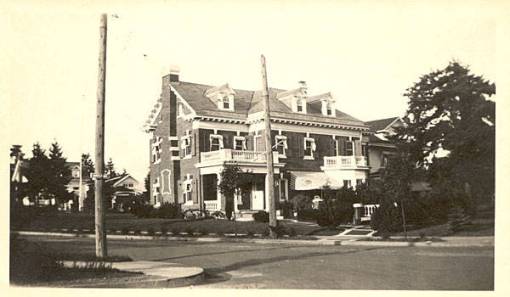 Here’s the Thomas Prince House, at 2903 NE Alameda Street, right at the top of Regents Hill. The then photo is from about 1922, taken by leaders of the Alameda Park Community Church who were out snapping several other photos of the neighborhood in those years, about the time the church was being built. The now view is from approximately the same location.

As long as we are focusing in on the Thomas Prince house, we should look at another photo pair, this time a view from The Oregonian on July 22, 1917. The caption of the 1917 story says the $25,000 house featured a “fountain room.”

We visited the house recently and didn’t see any sign of the fountain room, though we did note the beautiful almost 3-D woven tile in the upstairs bathrooms; the marble fireplace (and a signature etched into the hearth); and the beautiful and stately birch paneled entryway. See the photos below by Emma Decker. The house is worthy of its national register status (Here is a link to the nomination form filed in 1985 Thomas Prince House HNR Nomination complete with floor-by-floor drawings and descriptions). 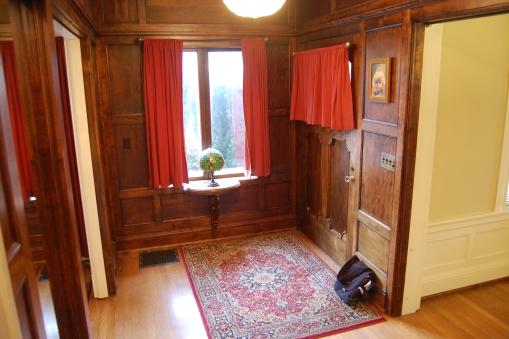 Prince was an interesting person with at least two major careers behind him when at age 71 in 1912 he agreed to be the financial backer for Oliver K. Jeffrey and the Oregon Home Builders Inc. Jeffrey and his company built more than two dozen homes in Alameda and Olmsted Park—many of them unique, grand and built for wealthy clients—and as regular readers of the blog will recall, also built the building that now houses Gordon’s Fireplace Shop at NE 33rd and Broadway (check out the story if you haven’t read it. We know you’ve driven by this place and wondered what it’s all about). More soon about the Oregon Home Builders, a fascinating story that ends in a broken business model and bankruptcy.

Prince’s roots were in Massachusetts, where he was a founding partner in Reed and Prince, a manufacturer of nuts and bolts with national market share (still in operation today). Something happened in the Prince family in the 1890s, and Thomas, accompanied only by his developmentally disabled son Harold Thomas Prince, left on their own for Oregon, where the elder became a walnut and fruit grower near Dundee. When he died in February 1920 at age 79, Prince owned and operated the largest walnut orchard in Oregon.

Though it’s known today on the National Register of Historic Places as the Thomas Prince House, the elder Thomas didn’t spend much time here. He died in California in 1920 and his death set off a feeding frenzy among heirs and beneficiaries as his $2 million estate was divided up. A sad series of stories in The Oregonian in the three years after his death documents the infighting and finger pointing (as well as the occasional sale of property like Prince’s seven-passenger Pierce Arrow touring car sold at auction in 1920). Son Harold Thomas Prince lived in the house with his wife Marjorie until the 1950s.

As a bonus for reading all the way to the bottom, here’s an interesting tidbit about the house that turned up in the August 11, 1918 edition of The Oregonian:

Here’s the cadastral map from 1909 showing the Olmstead Park plat. This roughly five-block square area is north of the Alameda Ridge and tucks in under the southeast corner of Alameda Park. Today this part of the neighborhood is clearly considered part of the Alameda District. Out on the ground even in 1911, these two brand new districts were indistinguishable, interwoven by the same streets, the same water, gas and sewer mains, and many of the same architects and builders who were beginning to populate this area with homes.

The Olmsted in “Olmstead Park” was probably John Charles Olmsted, stepson and nephew of the legendary landscape architect Frederick Law Olmsted (this is not a typo…someone added an “a” into the plat name over the years). John Charles Olmsted and his brother Frederick Law Olmsted, Jr. helped design Portland’s park system and were busy with other commissions here in Portland — including one for the Alameda Land Company — in the years after the 1905 Lewis and Clark Exposition (which they also designed).

By 1909, the neighborhoods to our north and south were already established, and the Portland Railway, Light and Power Company was opening its Broadway Streetcar line with a connection to the heart of Alameda Park and Olmstead Park.

In 1910, before home construction was underway, much of the property in Olmstead Park was owned by one man: B.M. Lombard, a real estate developer who owned large tracts in north and northeast Portland, and whose name is memorialized by North Portland’s Lombard Street. In fact if you look at the plat, you can see that today’s Dunckley Avenue was originally platted as Lombard. Other properties were owned by construction companies, investment banks and real estate developers, including Oregon Home Builders Inc., Colonial Construction Co., Hibernian Investment Bank, Provident Trust Company and Clodfelter Real Estate.