We’ve come across a digitized collection of photos from 1905—thanks to the Oregon Historical Society (OHS)—that offers a tantalizing glimpse of homes and street scenes on Portland’s eastside, including one we’ve been able to identify and a bunch of others we’re still working on.

The collection which resides at OHS includes 88 individual glass plate negatives taken by an unknown photographer that were left behind in a Northeast Portland boarding house.

Many of the photos depict the Woodlawn neighborhood. The one we sleuthed out is a tidy one-story hip-roofed bungalow not far from Woodlawn School that looks a lot today like it did back in 1905. See for yourself:

This particular photo was not too difficult to identify because the home’s pre-address-change address is visible on the front porch column. With a little detective work we were able to identify this as a home in the 7000 block of NE 11th Avenue.

We’re confident there are other distinguishing details in these photos that will be tantalizing to many of us photo detectives. But even if you just enjoy a little time travel, it’s so interesting to have a close up look at these houses as brand-new buildings, to see the family moments and groups, the dirt streets and background views.

It’s been a quiet year so far on the AH blog, in deference to a busy batch of research for home owners and architects, several presentations, and ongoing exploration of our standing lines of history inquiry. We’ve been saving up some favorite old photos sent our way by history friend and photo collector Norm Gholston. Here’s one you’re going to want to take a close look at: the interior of a home in the vicinity of North Albina and Webster just after the turn of the last century.

Click in for a good look and then let’s take it apart in the way we like to do with Norm’s great old photos. 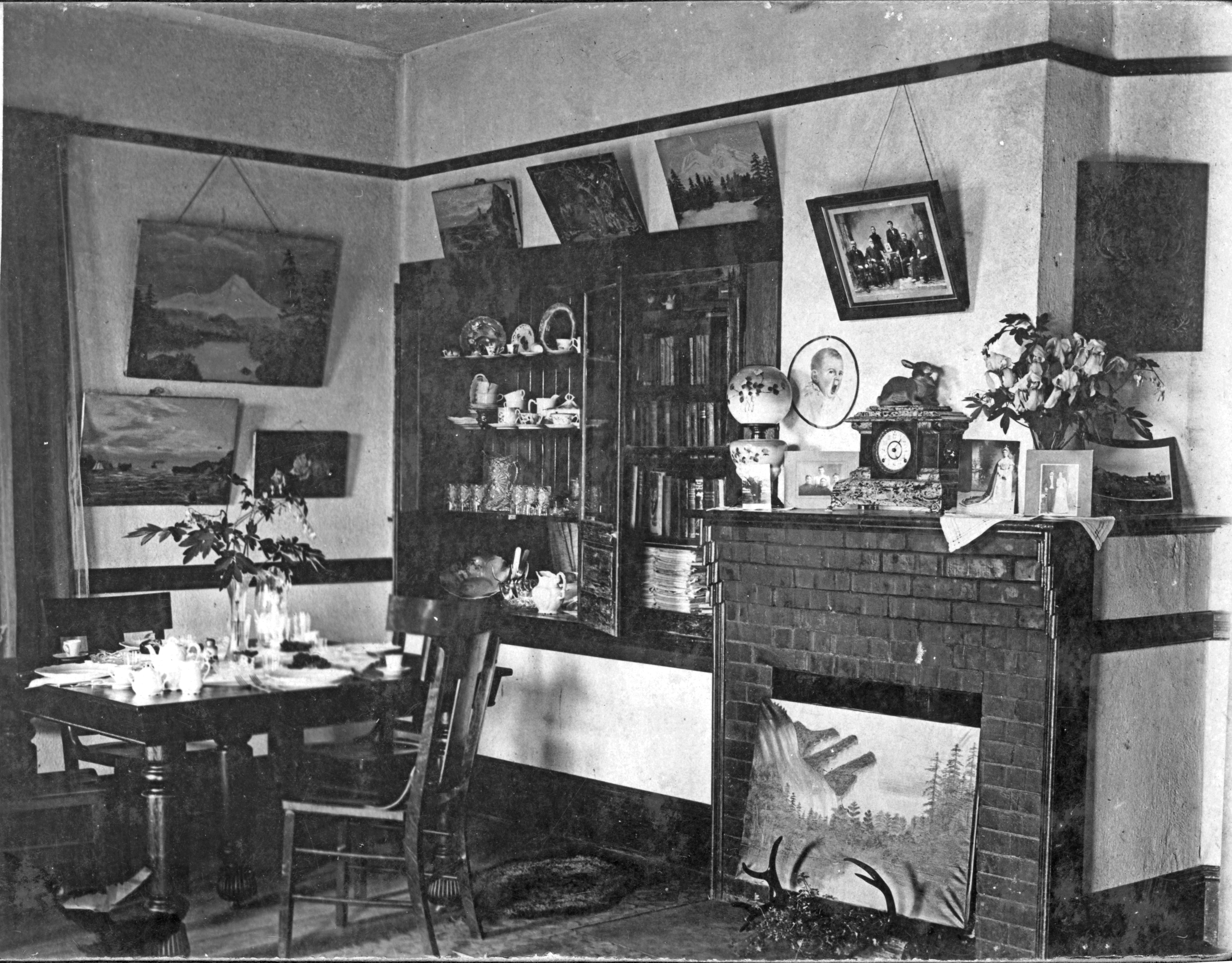 The mantlepiece tells multiple chapters of the family story and serves as home for the heirloom clock (and the rabbit). Our very favorite thing in this whole picture is the yawning baby on the wall.

Formal table setting, with two forks at each plate, cloth napkins, the good china. Are the flowers silk or the real thing?

The texture of the plaster—and the various cracks and wear marks—make us think this house has seen a few years. And interesting fireplace: we’ve never seen a wooden fireplace surround quite like that one with corner trim that steps back following the line of bricks.

The actual location of the house remains a bit of mystery. Norm tells us that on the back of the photo is written the address “5021 N. Albina,” which is curious for several reasons:

The address format is post-address change, meaning someone wrote that on there after 1931, which certainly could have happened. But the photo appears earlier than that to us.

The current building at that address is a mid-century brick duplex at the southwest corner of N. Albina and Webster…definitely not this place.

Could be that this is the interior of a house that stood there but was demolished before the 1925 aerial photography, but why would someone write 5021 Albina on the back given that it was never known as 5021? Hmm.

So we’re glad to consider this the interior of a house in the neighborhood from the turn of the last century and leave it at that. One of those mysteries that may never be solved. We like to solve them, but we’re glad just to continue contemplating too.

Here’s another outstanding turn-back-the-clock view of a business on NE Alberta Street: George and Sylvia Ford’s Pool Hall, Lunch Counter, Confectionery and Cigar Store, mid-block between 17th and 18th on the south side of Alberta, taken in September 1909. Click into this photo and have a good look around, there’s so much to see. 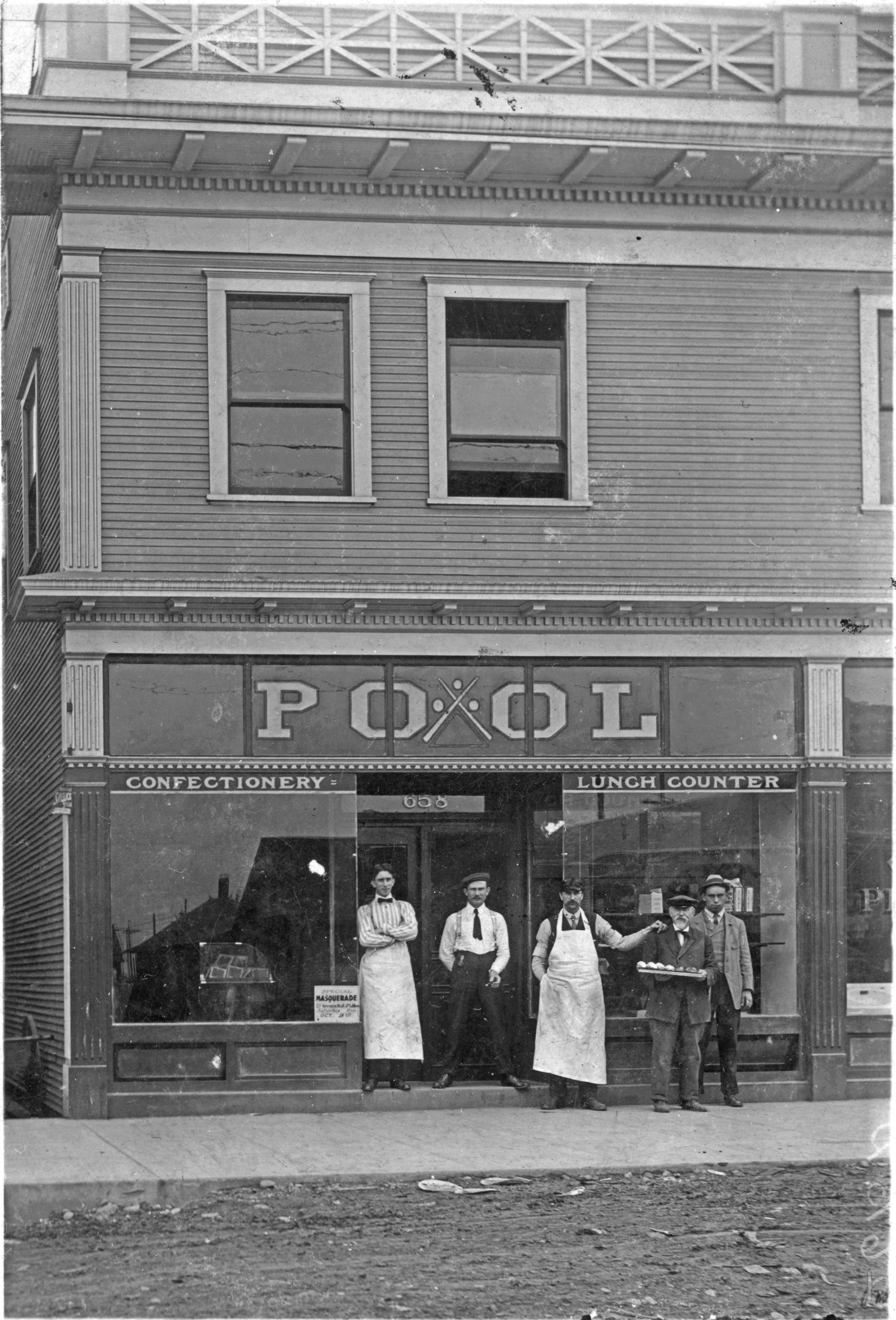 In front of Ford’s Pool Hall, 658 Alberta Street, 1909. Photo courtesy of the Gholston Collection, used with permission. Click to enlarge.

Things that jumped out at us: reflections in the windows showing the north side of the street; the faces and clothing of the men; the small advertisement in the left window advertising the “Special Masquerade” on Saturday evening, October 9th (that’s how we know this is 1909); that’s George Ford, by the way, in the middle of the group in the apron with his hand on the older gentleman’s shoulder. We guess the confection guy is on the far left in the bowtie and the cigar guy is holding the cigar. George and his friend (is he the baker from next door?) might be running the lunch counter.

Thanks to AH reader Norm Gholston for sending this photograph our way. Norm knows we enjoy being photo detective, and this one took some digging to make sure we were in the right place. Here’s the same view today: 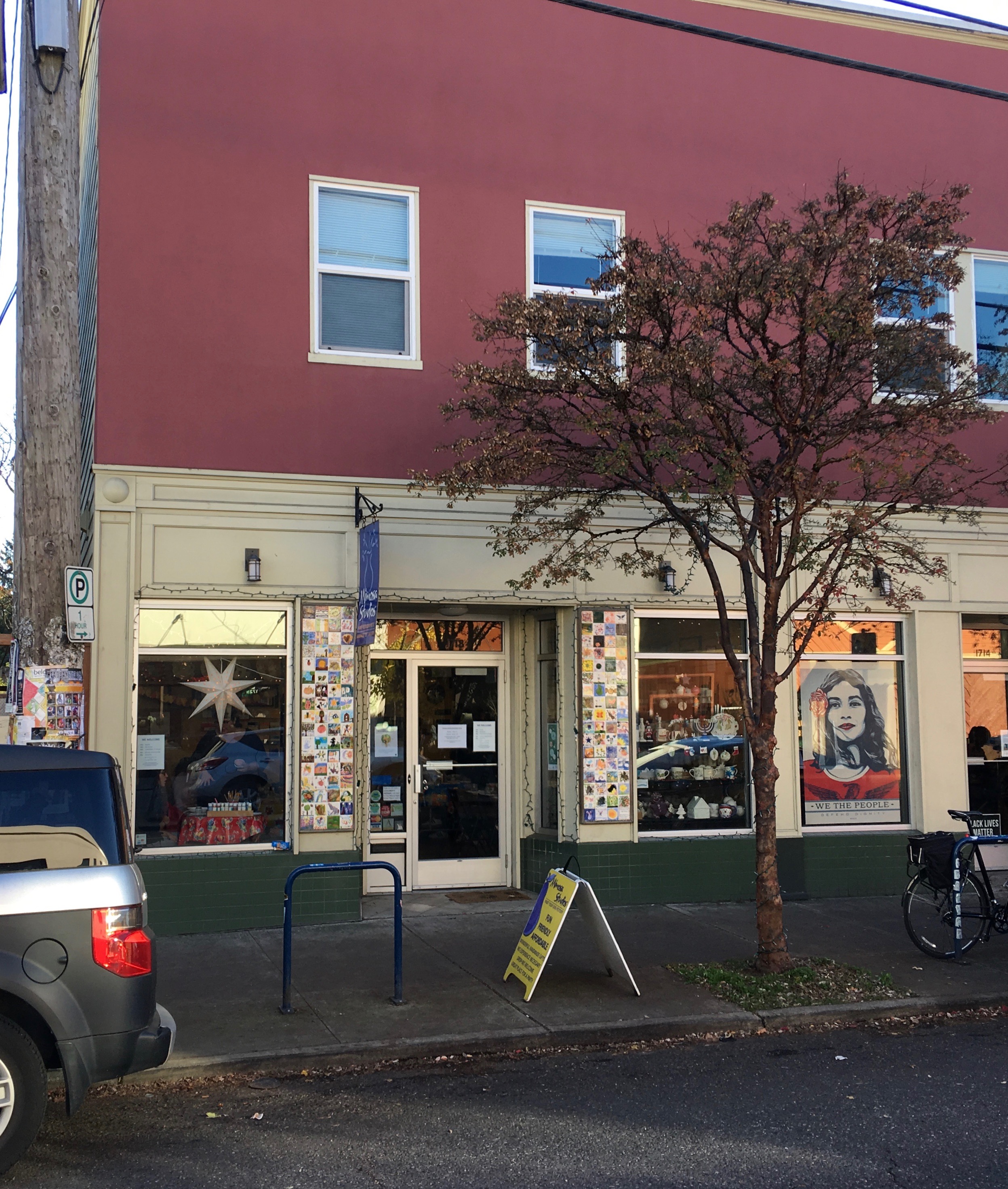 When Norm sent this one along, he knew it was on Alberta. And we could see the address over the door—658—which translates to today’s 1718 NE Alberta. Remember that all of Portland’s addresses were changed in the Great Renumbering of 1930-31.

With the current address in hand, we went out to take a look, and that’s when this got a bit puzzling because the next door neighbor building to the east—the one that houses Earl’s Barbershop—has many similar features to the building in the 1909 photo. Look at the dentals under the first and second level soffits and the short horizontal brackets that support them; the column-like pedestals along the building edges. On first glance at that block today, you’d say Earl’s is the right place, especially when you look at the modernized front of the Maggie Gibson Plaza building just to the west. Both buildings are owned today by Portland Community Reinvestment Initiatives, Inc.

South side of NE Alberta showing the entire block between NE 17th and NE 18th. Maggie Gibson Plaza building (on the right) once housed five distinct store fronts on the first floor and a large meeting space known as Baker Hall upstairs. In later years, the space was home to the Royal Esquire Club of Portland. Photo taken in November 2018. Click to enlarge.

But that notion doesn’t hold up when you dig into the details of building permits, city directories and old newspaper stories. 658 was clearly housed in the building to the west (right). Interesting to note that both were built in 1909 by the same builder for the same owner. Our hunch is they probably looked alike way back when.

The clincher is the old Sanborn Fire Insurance Map from 1924 (below), which shows all of the side-by-side stores in both buildings. You’ll find 658 on the east end of the Gibson Plaza building and there’s five feet of space to the next neighbor to the east. Remember that these maps were drawn primarily for fire insurance underwriters, so they show building proximities, location of plumbing, fire alarm systems, heating systems. S = shop; D = dwelling; FA = fire alarm box; F = Flat. 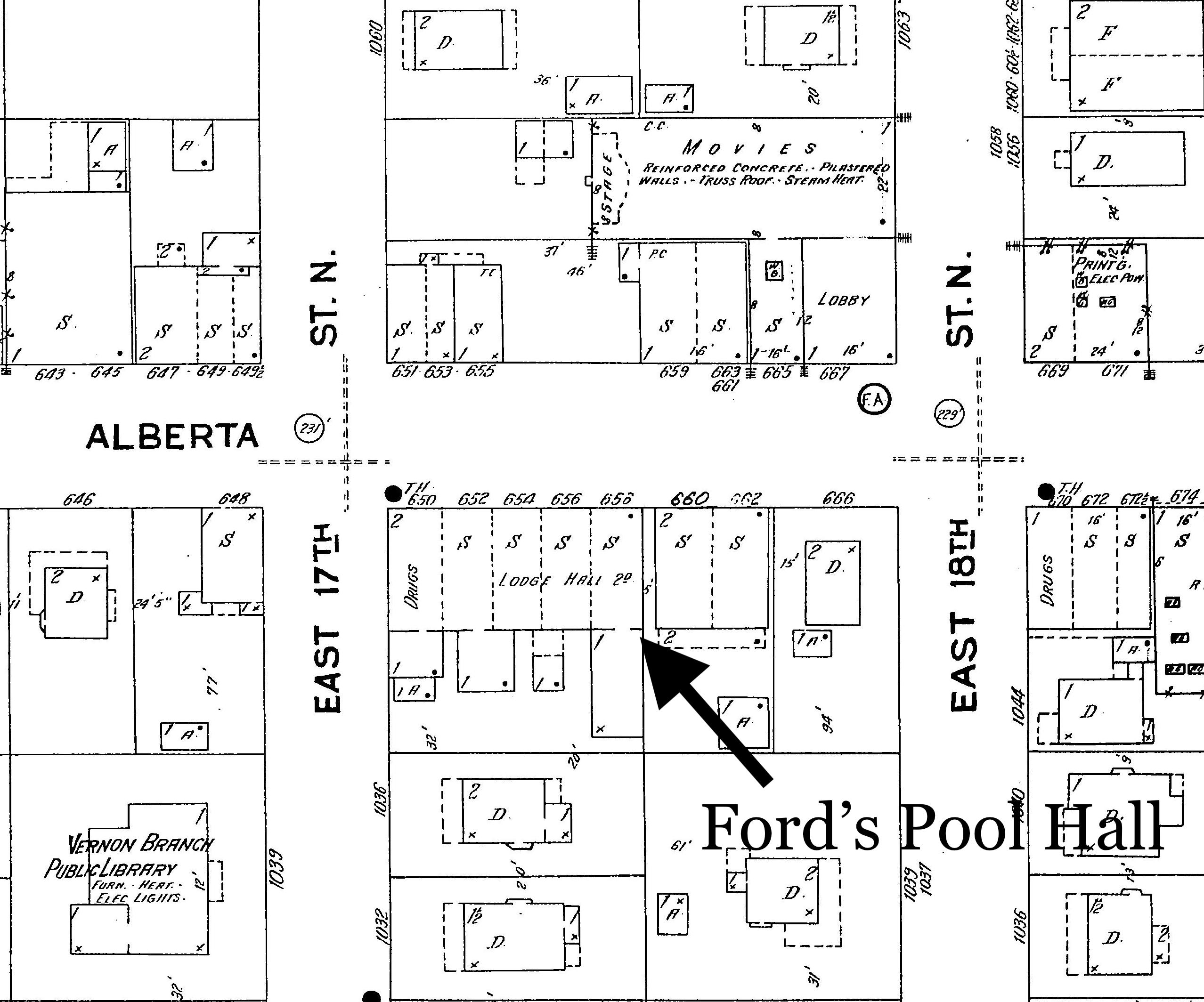 The Sanborn (and city directories) show there was a lot going on in this block, on both sides of the street. Here’s a run down of the Ford’s Pool Hall neighbors, by address:

654      Grite’s Barber Shop and entrance to Baker Hall, which was upstairs. Encompassing the second floor of the building was an open meeting space known as “Baker Hall,” which in the early days was where the Alberta Oddfellows Lodge met before building their own space, and in later days the first home of the Royal Esquire Club of Portland. In the 19-teens, Baker Hall was the frequent site of lectures, dances and community meetings.

Next door to the east in the building that houses Earl’s today:

The house on the corner to the east—addressed as 666 in the Sanborn plate—is still there today and was Freda’s Beauty Shop and home to Freda Baker.

The FA in front of the Victoria Theater was a fire alarm pull box.

Once we figured out the location of Ford’s Pool Hall, we wanted to know more about George and Sylvia. We found them during the pool hall days living just up the street at the corner of NE 18th and Wygant. Here’s the couple on their wedding day in Colfax Washington, October 26, 1892: 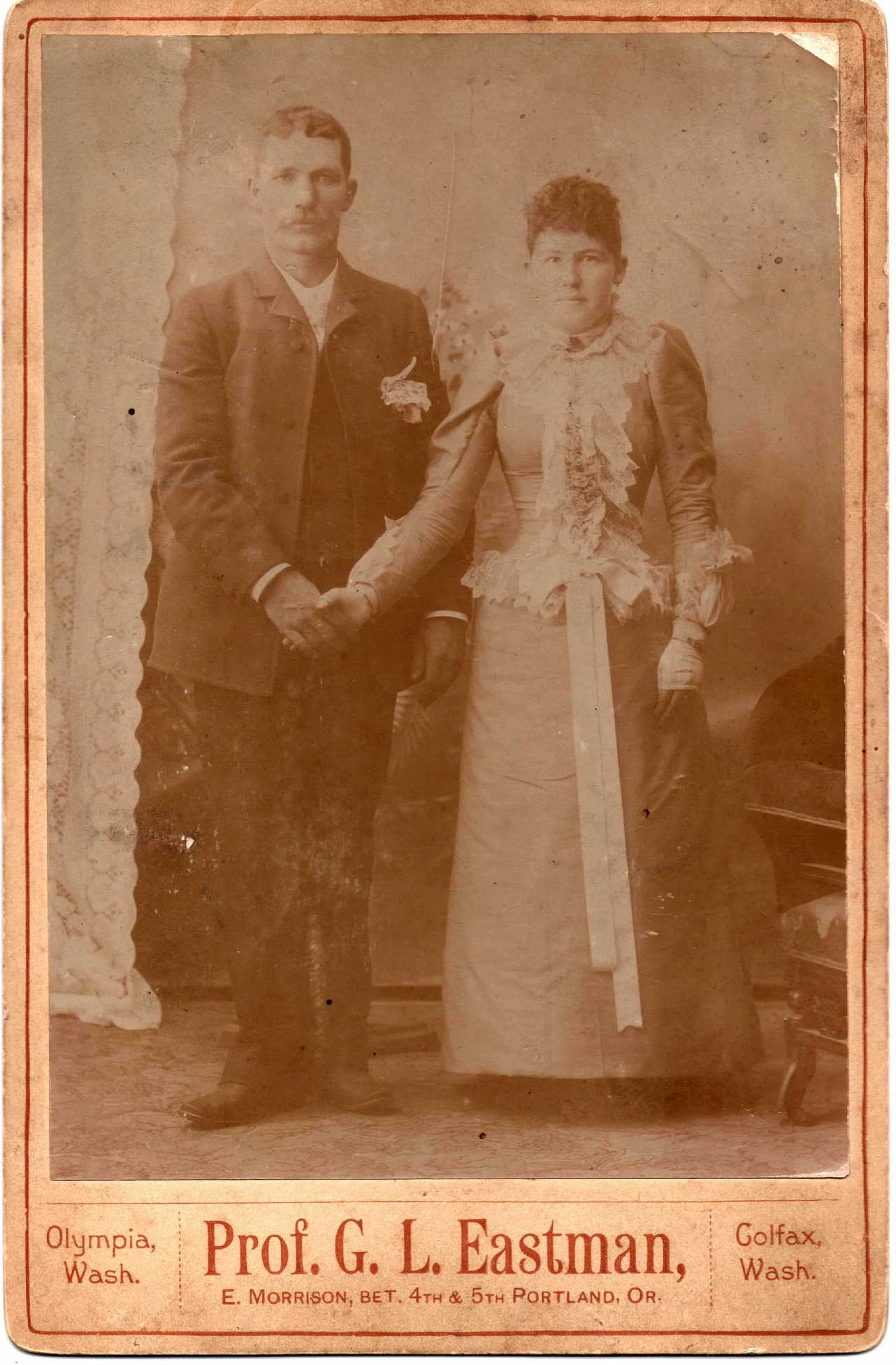 George and Sylvie (as she was known) farmed for a while near Lapwai, Idaho in the 1890s and early 1900s before moving to Portland. They opened the pool hall, confectionary and lunch counter in 1909 and later ran a confectionary and cigar business at NE 21st and Alberta (two business lines that were frequently found together in the same retail store, candy and smokes). The Fords raised two children—George B. and John J.—and Sylvie had a busy dressmaking business as well. George died on July 23, 1937. His obit reads:

Geo P. Ford, who has conducted a cigar and confectionary store at Alberta and 21st Ave., for a number of years, and an old resident of this district, passed away at his home, 4925 N.E. 19th Ave., last Friday, at the age of 74 years. He leaves to mourn his death, his wife, Sylvia Ford, and two sons, George and John Ford, and several brothers and sisters. Funeral services were held Monday afternoon, Vault entombment, Riverview Abbey Mausoleum. Heartfelt sympathies goes out to the bereaved family in this, their sad bereavement.

We’re ready for the next photo mystery.